While New England Patriots players might be concerned about the offensive coaching staff heading into the 2022 season, second-year quarterback Mac Jones inspires plenty of confidence and rave reviews from his peers.

Expectations are high for Jones in 2022. The 6-foot-4 quarterback is being asked to step up both as a leader and a playmaker this fall. While New England might not be one of the most pass-heavy offenses in the NFL, it will be thrusting a bigger role onto Jones’ plate.

By all accounts, it’s something the 23-year-old is ready to handle. Comparisons to Tom Brady aren’t being made by anyone in New England, but Jones is creating a lasting impression on those around him. From coaches and executives preaching about his work ethic to Patriots players glowing on his character and personality, he won everyone over.

Related: What Mac Jones success says about the NFL, quarterbacks

One of his greatest strengths is his mental approach to the game and how he handles everyone. Despite having just a few years of experience as a starting quarterback at both the collegiate and NFL levels, players see it instantly. 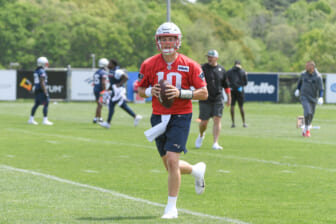 While Jones certainly appreciates all the praise, the comment he might appreciate most from Smith is that the Patriots’ quarterback does “have that dog in him.”

This is the same quarterback who played in the Pro Bowl as a rookie, rushed for a 31-yard touchdown and then did the Griddy dance.

It’s not often you see young passers garner the respect of their teammates and peers around the league this quickly. The way Jones carries himself and the personality he displays, both having fun and taking the game seriously, is quickly making him a favorite around the NFL.