Round six of Jorge Masvidal and Colby Covington’s ongoing rivalry reportedly occurred outside a Miami restaurant on Monday night.

Fox Sports 640 South Florida radio host Andy Slater broke the news late yesterday evening of a clash between the former best friends turned enemies at a restaurant in the Miami Beach area of Florida. “SLATER SCOOP: UFC stars Colby Covington and Jorge Masvidal got into a fight moments ago at Papi Steak restaurant in Miami Beach,” he wrote on Twitter.

It wasn’t long before various accounts from the dust-up showed up on social media, including from Masvidal himself. An hour after the alleged incident, the 37-year-old posted a video to his Twitter account that seemed to allude to the incident between the two former American Top Team teammates.

“Calling this the show-your-face challenge, you know?” Masvidal said. “Um, what’s up? I’m from Dade County. You talk that sh*t, you gotta back it up. That’s how my city rolls, man.”

Around the same time, one of “Gamebred’s” handlers in First Round Management co-founder Malki Kawa chimed in on Twitter with a claim that “Chaos” allegedly lost a tooth during the restaurant altercation.

I’m hearing that a someone not from Miami who says he’s the king of it is missing a tooth. Can someone confirm this? I need the video asap,” Kawa wrote.

Covington and Masvidal faced each other 16 days ago in the main event of UFC 272. It was a fight won by Covington via a dominant unanimous decision. Before and after the bout, Masvidal made it clear his problems with Covington would remain unsettled and that he would still confront his former roommate if the two crossed paths again. Well, it looks like he was a man of his word on Monday. 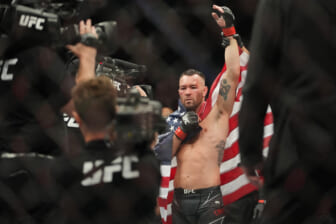 There are still few details on how the incident at 11:30 PM ET started or if any arrests were made. TMZ reported that sources informed the outlet that Covington was having dinner with YouTube personalities The Nelk Boys, and was attacked by Masvidal outside the restaurant.

They posted a video that is allegedly after the altercation, where the Oregon native can be overheard saying, “He’s over here swinging, trying to come at me, and I ran out the back of the room. … How would he even know I’m here?”

Both Masvidal and Covington have not yet been booked for their eventual returns to the Octagon.