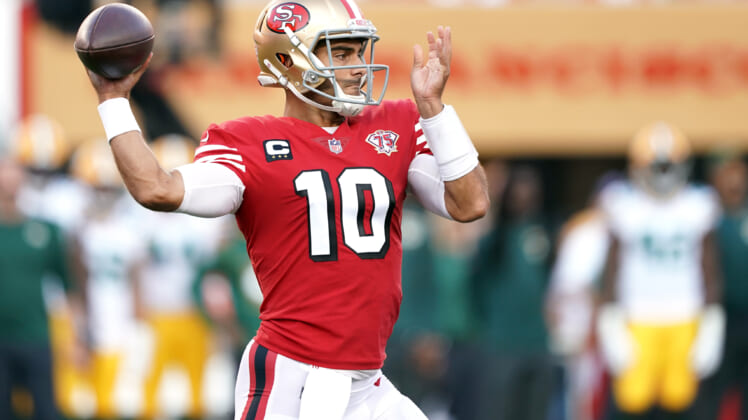 Jimmy Garoppolo and the San Francisco 49ers got off to a terrible start Sunday night against the Green Bay Packers.

That included Green Bay taking a 10-0 first quarter lead with Aaron Rodgers being a perfect 11-of-11.

As for Garoppolo, he started the game completing 2-of-5 passes for 15 yards. The veteran also threw his first interception of the season into the hands of Jaire Alexander.

Throwing it into double coverage down the field is always a decision.

A few plays later, and the 49ers’ defense held Green Bay without points to keep it a 10-0 game.

With Trey Lance waiting in the wings on the sidelines, fans at Levi’s Stadium in Santa Clara could be heard booing Garoppolo after the interception.

One now has to wonder whether it is time for Kyle Shanahan to pull the trigger. Then again, the other rookie first-round picks at quarterback didn’t do too well earlier on Sunday around the NFL.