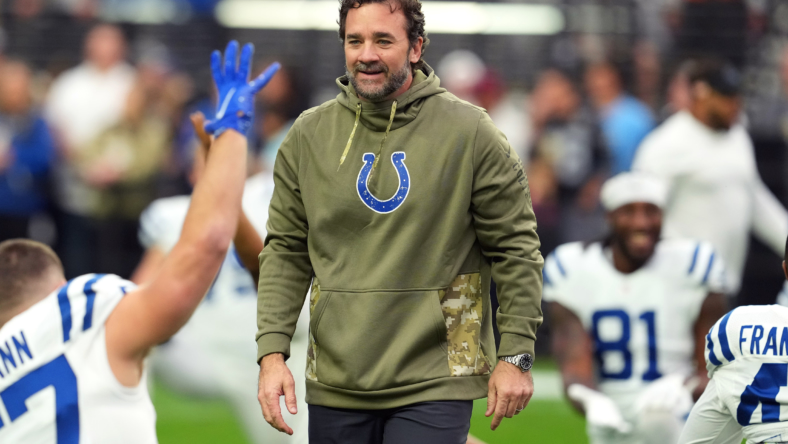 The Indianapolis Colts got a win on Sunday against Las Vegas. The Colts’ record is now 4-5-1 in what’s been a crazy season for the organization. From tying the first game of the year to being shut out by Jacksonville in Week 2 and then pulling the upset over Kansas City.

Not to mention benching former NFL MVP Matt Ryan for Sam Ehlinger. Plus firing their offensive coordinator and head coach before making the outside-the-box hiring of Jeff Saturday.

It’s been a season of highs and lows, and the team still has yet to reach their bye week. One thing is for sure, this team will be focused and energized for the rest of the season.

Does the NFL control the “script” as to what is going on with storylines? Seriously, sometimes things just fit too perfectly into place not to ask the question, “is this rigged?” Colts owner Jim Irsay has tried really hard not to be his father when it comes to running the team. He had never fired a head coach in season until now.

Let’s quickly flashback, current general manager Chris Ballard initially hired Josh McDaniels to be the team’s head coach. At the last minute, McDaniels got cold feet and broke his word by backing out of his agreement. So, Irsay instructed Ballard to hire Frank Reich. This week Reich is fired, and Irsay makes the decision to hire Saturday.

All this is going on during the same week the Colts are set to take on McDaniels’ team. Irsay could have picked any other week to fire Reich or even waited until after the season. However, after losing twice to Tennessee, getting shut out by Jacksonville, tying Houston, losing to Washington after helping run his former quarterback out of town, and then being embarrassed by the team’s biggest rival in New England, he decided the time was now.

Irsay wasn’t going to waste another opportunity for a sweet, delicious, and tasty bit of revenge. So, now Saturday is tasked with not only having to validate to everyone that he is the right man for the job. He also has to beat the guy who was originally supposed to have this position. Meanwhile, McDaniels was now feeling the pressure of having to be the first guy to go against Saturday and the Colts and not lose.

Remember, McDaniels has 10+ years of NFL coaching experience, and Saturday has only high school football experience. Well, Saturday got his team focused, ready, and fired up to play. The Colts went out and looked like a team that many fans were expecting to see in Week 1. And they got a win in Saturday’s NFL head coaching debut.

The team is taking on the identity of its head coach

“The team is taking on the identity of its head coach” is a classic NFL cliche. In this case, it might very well be true. Looking at how the team played in eeks one through nine compared to Week 10, you can’t help but notice a difference.

For one, the Colts got off to a fast start by taking an early seven-nothing lead. All thanks to a 37-year-old Ryan QB sneak for a touchdown, of all things.

The team just wasn’t messing around. They weren’t trying to be cute or out-think their opponent. They kept it simple and simply executed. This also led to them holding a lead after the first quarter, halftime (the first time since last Christmas), and after the third quarter.

Now, this team wasn’t anywhere close to being reminiscent of the teams Saturday played on back in the day. But they were a far cry from what they had looked like under Reich’s tenure this season.

Saturday simply let his coaches do their jobs. That meant Gus Bradley called the defense. Bubba Ventrone took care of special teams. And newcomer Parks Frazier handled the offense. Saturday made sure to include his input when necessary. But overall, he just managed the game and the team.

We don’t know what will happen next week. The NFL is crazy, and as we’ve already seen, anything can happen. What we do know is that this Colts team will be led by a man who wants to see everyone in the organization succeed. It doesn’t matter if it’s someone on the kitchen staff, the equipment personnel, or in the front office.

Saturday just wants to see the Colts thrive, and he will do whatever he can to make that happen. To steal a quick line from him, “You can be dang sure” that this Colts team will be prepared to face Philadelphia on Sunday. And that everyone on staff will be tasked with taking care of their responsibilities.