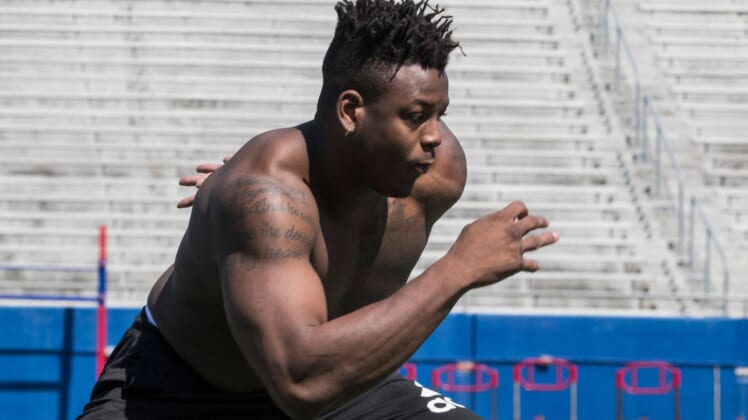 Baltimore Ravens linebacker Jaylon Ferguson is dead at the age of 26, becoming the latest tragic death of an NFL player this offseason.

Ferguson, a star at Louisiana Tech, was selected by the Ravens with the 85th overall pick in the 2019 NFL Draft. The 6-foot-5 edge rusher made an immediate impact, recording nine quarterback hits and 2.5 sacks in his rookie season.

A Louisiana native, Ferguson served as a rotational pass rusher on the Ravens’ defense in each of the past three seasons. He also holds the NCAA record for career sacks (45), thanks to a dominant 2018 season with 17.5 sacks at Louisiana Tech.

Ferguson becomes the third NFL player to die this offseason. Pittsburgh Steelers quarterback Dwayne Haskins died on April 9 after being struck by a car and Arizona Cardinals cornerback Jeff Gladney passed away on May 30 in a multi-fatality car accident.

Born on Dec. 14, 1995 in Zachary, Louisiana, Jaylon Ferguson quickly burst on the scene as one of the best football players in the state. In a region overloaded with talent, Ferguson became the 57th ranked recruit in Louisiana for the 2014 recruiting class by 247 Sports.

Receiving scholarship offers from across the country, including North Carolina State, Mississippi State and Memphis, Ferguson chose to stay home. He joined the Bulldogs’ football program, playing for the team just a three-hour drive away from home.

He immediately became a star at Louisiana Tech. In his first season, Ferguson recorded 15 tackles for loss and six sacks. He took his game to another level the following year, registering three forced fumbles and 14.5 sacks in 14 games.

After a seven-sack campaign in 2017, Ferguson returned for his senior season and made history. The explosive edge rusher recorded 17.6 sacks and 26 tackles for loss in 13 games. Facing Hawai’i on Dec. 23, 2013, Ferguson broke Terrell Suggs’ FBS record for career sacks.

While he didn’t make the same impact in the NFL, there was already some buzz about him before training camp this year. The Baltimore Sun reported on June 1 that Ferguson looked slimmer and put in the work to become more explosive off the edge this year. On June 16, Kevin Eck of Ravens.com detailed the strong impression Ferguson made on coaches this summer.

Sportsnaut extends its condolences to Jaylon Ferguson’s friends and family.

Teammates, NFL players and analysts all reacted to Ferguson’s heartbreaking death, expressing shock and commemorating who he was.