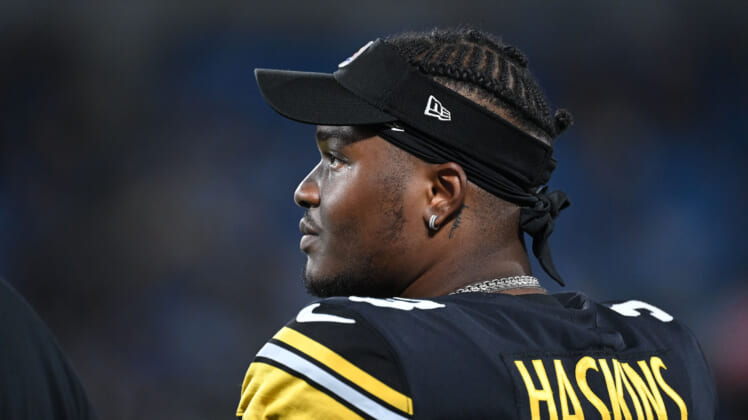 Dwayne Haskins, the 15th pick in the 2019 NFL Draft, died on Saturday morning after being struck by a dump truck in South Florida.

Just days shy of his 25th birthday, Haskins was on the Pittsburgh Steelers roster in 2021 attempting to turn around his NFL career. Selected by the Washington Commanders with the hopes of becoming a franchise quarterback, Haskins struggled early in his NFL tenure.

The 24-year-old quarterback was still a member of the Steelers’ roster, expected to compete for a spot on the roster in training camp.

Sportsnaut extends its thoughts and condolences to Dwayne Haskins’ family, friends and both the Steelers and Commanders’ organizations.

Details on the fatal accident

According to ESPN’s Adam Schefter, Haskins was in South Florida training with his Steelers’ teammates.

The Florida Highway Patrol released a statement on Saturday, via Miami Herald, confirming there was a fatal accident involving a 24-year-old male pedestrian. While FHP didn’t confirm it was Haskins, information from law enforcement said the pedestrian was struck by a dump truck, where he was pronounced dead on the scene. Within the area, westbound lanes of I-595 between north and south of I-95 were briefly shut down while an investigation was conducted. All lanes have since reopened.

This is a live story. More details will be provided throughout the day

“I am devastated and at a loss for words with the unfortunate passing of Dwayne Haskins. He quickly became part of our Steelers family upon his arrival in Pittsburgh and was one of our hardest workers, both on the field and in the community. Dwayne was a great teammate, but even more so a tremendous friend to so many. I am truly heartbroken.

Our thoughts and prayers are with his wife, Kalabrya, and his entire family during this difficult time.”

Washington Commanders’ statements on the death of Dwayne Haskins

“We are devastated to hear the news of the tragic passing of Dwayne Haskins Jr. He was a young man with a tremendous amount of potential who had an infectious personality. To say we are heartbroken is an understatement. Our hearts and prayers are with the members of Dwayne’s family and all of those who knew him and loved him.”

“I am absolutely heartbroken to hear the news of the passing of Dwayne Haskins Jr. Dwayne was a talented young man who had a long life ahead of him. This is a very sad time and I am honestly at a loss for words. I know I speak for the rest of our team in saying he will be sorely missed. Our entire team is sending our heartfelt condolences to and thoughts and prayers to the Haskins family at this time.”

Dwayne Haskins was born in Highland Park, New Jersey on May 3, 1997. He and his family moved to Potomac, Maryland midway through his freshman year of high school. The young quarterback became a star on the gridiron at Bullis School.

A four-star recruit, Haskins generated interest from the top programs in the country. He committed to Ohio State on January 16, 2016, enrolling in the same 2016 recruiting class as Nick Bosa.

As a redshirt freshman, he appeared in eight games and showed early signs of promise. After posting a 173.1 QB rating in the 2017 season as a backup quarterback, Ohio State made him the starter in 2018.

The 6-foot-4 quarterback thrived. Ohio State went 13-1 under coach Urban Meyer, finishing as the No. 3 team in the country with a Rose Bowl victory over Washington. Haskins dominated in the 2018 season, throwing 50 touchdowns and finishing third in Heisman Trophy voting behind Kyler Murray and Tua Tagovailoa.

Washington selected him with the 15th pick in the 2019 NFL Draft. Haskins appeared in his first regular-season game on September 29 against the New York Giants. On Nov. 17, 2019, he threw his first NFL touchdown pass.

Ultimately, things didn’t work out in Washington for the first-round pick. Following his release, Haskins joined the Steelers’ organization. Mike Tomlin took a special interest in him, wanting to help him develop both professionally and off the field.

After learning of his sudden and heartbreaking passing, the NFL community mourned Haskins. From NFL reporters to active NFL players like Eric Ebron, Darius Slay, Tim Tebow and Maxx Crosby, the football world is mourning on Saturday.