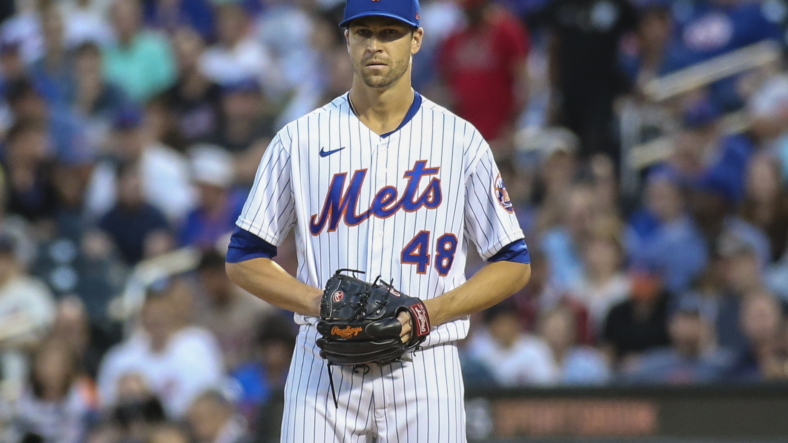 New York Mets starting pitcher Jacob deGrom represented the team’s biggest addition heading into August, providing a massive spark before the MLB postseason. While he will be integral for a potential World Series run, he also might not be with the New York Mets for long.

Salaries for the highest-paid MLB players are skyrocketing and the best pitcher in baseball took notice. Despite being plagued by injuries in each of the past two seasons, the 34-year-old hurler intends to exercise his opt-out clause this winter.

While a $30.5 million salary in 2023 would make deGrom one of the highest-paid pitchers, there is far more money on the open market. Since returning from the injured list – a lengthy stint caused by a stress reaction in his scapula – deGrom has pitched like he belongs in the conversations of MLB MVP candidates.

It’s also important to put some of his statistics from August into perspective. deGrom’s 40.6% K-BB rate not only led MLB, but it was also 11.7% higher than the second-highest pitcher (Blake Snell, 28.9%). He was also one of only three pitchers (deGrom, Freddy Peralta, Edward Cabrera) to hold opponents under a .140 batting average in August. As for deGrom’s 22% Swinging Strike rate, Chicago White Sox ace Dylan Cease (15.6%) was the next closest starter,

deGrom remains one of the hardest throwing pitchers in MLB today, even in his 30s with arm troubles being responsible for his extended stints on the IL. It’s precisely why, as long as he finishes the 2022 season healthy, opting out is easy because there will be lucrative contract offers available this winter.

Projecting the cost of a Jacob deGrom contract

It’s a safe assumption that deGrom won’t be able to match the contract length Kevin Gausman (five years, $110 million) signed last offseason. Between age and the high durability risk, it’s extremely doubtful that there will be any team willing to offer even a four-year deal.

However, a three-year contract seems doable. MLB teams can structure it as a two-year deal with an option on the third year that vests into a player opt-out if deGrom reaches a specific number of innings from 2023-’24. By taking that approach.

New York wants to bring him back and owner Steve Cohen told Jon Heyman on The Post podcast “The Show” that there is a desire to re-sign deGrom. However, the potential cost might prove to be challenging for the Mets.

Heyman asked multiple people around MLB about the potential contract that might be required to sign deGrom in free agency. The lowest estimates came in at $33-$35 million annually over two seasons, but a more common projection is at least a $40 million AAV.

Fittingly, the contract Max Scherzer signed with the Mets ($130 million over three years) seems is viewed as a reasonable marker for deGrom. While Scherzer, a three-time Cy Young Award winner, carries a better track record for his durability, deGrom is the better pitcher.

As for where deGrom might land in free agency, the Mets, Atlanta Braves and Texas Rangers remain the most discussed landing spots. Atlanta could be in an especially favorable position with a majority of its young core signed to long-term deals with low salaries for the next two years.