When the Jacksonville Jaguars officially signed quarterback-turned-tight end Tim Tebow earlier in May, it was certainly a point of contention. In fact, reports surfaced that some within the Jaguars’ organization were not happy about the move.

Rookie No. 1 pick Trevor Lawrence can’t be included in that group. The stud young signal caller recently spoke on the signing of Tebow, giving it a full-throated endorsement.

“(Tebow) looks great,” the Jaguars quarterback said, via the Associated Press. “He’s just a guy that you want to be around. Character is awesome. Had a few conversations with him and I can already tell, and [he’s] just a hard worker. No one is going to work harder than him. Those are the kind of guys you want in your locker room and you want to be around every day. And then I’m excited to see what he can do on the field as well. We got in a few days and he looks great. He’s in awesome shape.”

The 33-year-old Tebow has not suited up in a regular-season NFL game since all the way back in 2012 when he was playing his natural quarterback position with the New York Jets. A former Heisman winner, Tebow’s only season as a full-time starter was with the Denver Broncos in 2001 — one year after they made him a first-round pick.

It must be noted amid all the uproar of Jacksonville signing Tebow that he got zero guaranteed cash and the veteran minimum of $920,000 on his one-year contract. Obviously, the former star quarterback remains a longshot to break camp with the Jaguars.

However, there’s an opportunity here. The Jaguars just selected former Ohio State tight end Luke Farrell in the fifth round of the 2021 NFL Draft. He joins an otherwise mediocre group of players at that position in Duval with Tyler Eifert remaining a free agent. In fact, James O’Shaughnessy is the only returning Jaguars tight end to have recorded a catch (28) a season ago. 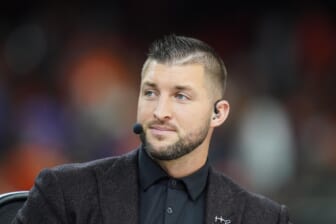 As for the drama surrounding Jacksonville signing Tim Tebow to play a completely new position after almost a decade since he last suited up, a lot of it surrounds Colin Kaepernick.

A Super Bowl quarterback during his days with the San Francisco 49ers, Kaepernick has not played in the NFL since 2016. Many believe he was blackballed after initiating the now-infamous national anthem protests that summer. Whether there’s correlation here remains to be seen.

What we do know is that when lesser players such as the high-profile Tim Tebow latch on with an NFL team when Kaepernick remains unemployed, it will lead to comparisons. That’s for sure.