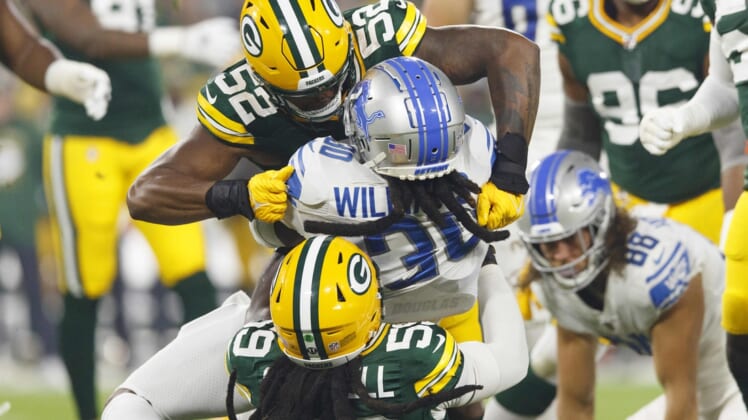 Jones rushed 17 times for 67 yards and caught six passes for 48 yards for Green Bay, which took over in the second half, scoring on its first three possessions. The Packers’ defense, which was carved up by Jared Goff in the first half, stiffened considerably after halftime.

Rodgers, who was under fire during a 38-3 blowout loss to the New Orleans Saints a week ago, enjoyed an impressive bounce-back performance against Detroit (0-2). He completed 22 of 27 passes for 255 yards and four scores, including a 22-yard connection with Robert Tonyan early in the third quarter that gave the Packers the lead for good at 21-17.

Green Bay (1-1) made it a two-score game with seven seconds left in the third when Rodgers found Jones for an 11-yard touchdown pass, finishing off an 11-play, 75-yard drive that chewed up nearly six minutes.

After Goff fumbled on the Lions’ next possession, Jones concluded the game’s competitive phase with 12:42 left, barreling in from the 1.

It was a far cry from the first half, when Detroit stood toe-to-toe with the Packers as Goff picked out open teammates at will against a defense that couldn’t mount a pass rush or cover receivers. The Lions needed just seven plays to score on the game’s opening drive, Goff hitting Quintez Cephus with a 5-yard scoring strike.

After Rodgers and Jones teamed up for a 4-yard touchdown pass at the 3:45 mark of the first quarter, Detroit regained the lead with 7:22 left in the first half. Goff found tight end T.J. Hockenson on an 8-yard strike.

Rodgers and Jones hooked up for a 1-yard score with 1:52 remaining in the second period, but Austin Seibert toed a 43-yard field goal with three seconds left to give the Lions a 17-14 halftime lead.

Goff finished 26 of 36 for 246 yards with two touchdowns and an interception. Hockenson caught eight passes for 66 yards.