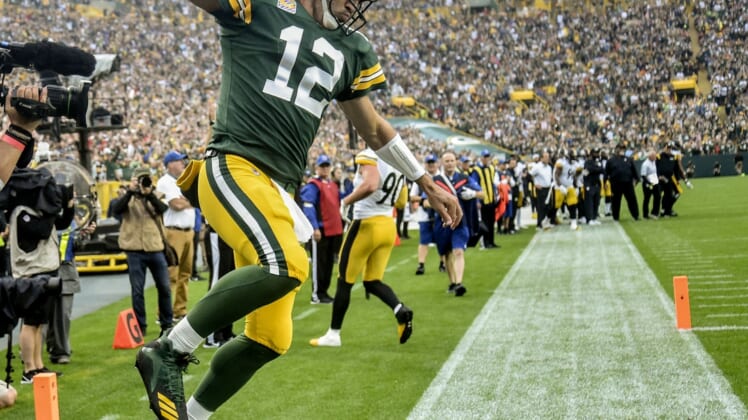 Aaron Rodgers and Randall Cobb connected on two touchdown passes Sunday while the Green Bay Packers’ defense contained the Pittsburgh Steelers after the game’s first possession to earn a 27-17 win in Green Bay.

Rodgers was 20 of 36 for 248 yards as the Packers (3-1) won their third straight game and maintained their one-game lead in the NFC North. Rodgers’ second scoring strike was the 420th of his career, tying Dan Marino for sixth in NFL history.

Meanwhile, Pittsburgh (1-3) dropped its third straight game and sank further into the AFC North cellar despite two milestones from Ben Roethlisberger. He completed 26 of 40 for 232 yards and the 400th touchdown pass of his career, making him the eighth man in league history to accomplish the feat. He also passed Marino for sixth place in NFL history in passing yards.

But after Roethlisberger found Diontae Johnson for a 45-yard score less than five minutes into the game, the Steelers mostly sputtered. After a 52-yard field goal by Chris Boswell with 5:46 left in the first half, their only score for the game’s remainder was Najee Harris’ 1-yard plunge with 4:04 left in the game.

By that time, Green Bay was in control. Rodgers had a hand in consecutive second quarter touchdowns, running 4 yards for the tying score less than two minutes into the period and then hitting Cobb with a 23-yard touchdown. That happened four plays after Roethlisberger was strip-sacked with Kenny Clark recovering at the Pittsburgh 23.

Mason Crosby converted a 26-yard field goal with eight seconds left in the half to make it 17-10 Packers at intermission. The kick came a play after an offsides penalty on the Steelers wiped out Minkah Fitzpatrick’s return of a blocked field goal for a go-ahead touchdown.

Crosby hit a 29-yard field goal at the 9:35 mark of the third quarter for a 20-10 advantage, and Cobb caught a 1-yard touchdown pass from Rodgers with 4:46 remaining for an insurmountable 17-point cushion.