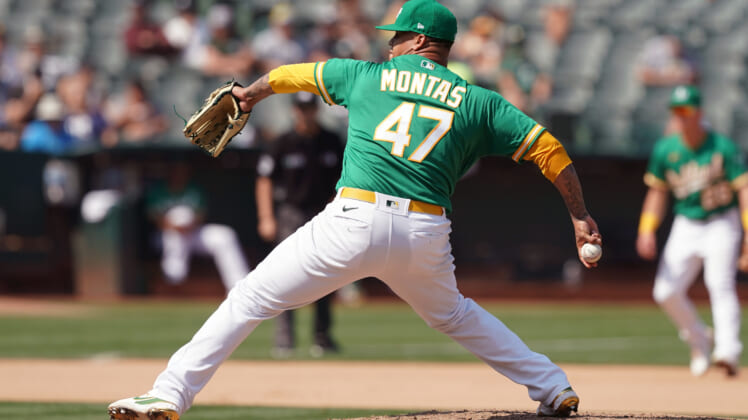 Oakland Athletics starting pitcher Frankie Montas had been one of the most-heralded arms on the block leading up to Tuesday’s MLB trade deadline.

In what can’t be considered too much of a surprise, the rebuilding Athletics actually pulled the trigger and moved the 29-year-old starter.

According to Ken Rosenthal of The Athletic, Montas has been dealt to the New York Yankees. Veteran reliever Lou Trivino also heads to the Bronx in the move.

Once the Cincinnati Reds dealt Luis Castillo to the Seattle Mariners for a package involving three top prospects, it became clear that Oakland would get a haul for Montas. It just wasn’t what we expected. Four prospects are headed to Northern California, none of them ranking in the top-four of the Yankees’ system.

In return, New York adds a controllable pitcher through the 2023 season who has performed at a high level throughout his MLB career.

Since the start of last season, Montas has actually pitched to a stellar 3.30 ERA with a 1.17 WHIP. He’s been consistently good during this span.

New York had pushed back against trading No. 1 prospect Anthony Volpe to the Cincinnati Reds or Luis Castillo. Instead, it acquires the second-best pitcher on the market for a pretty decent bounty.

Short-term, Montas will team up with Gerrit Cole and Nester Cortes to form a tremendous trio at the top of the rotation. New York made this move after acquiring All-Star outfielder Andrew Benintendi in a trade with the Kansas City Royals last week. It’s becoming rather clear that front office head Brian Cashman and Co. are going all in to bring the Yankees their first World Series title since back in 2009.

What the Oakland Athletics got back for Frankie Montas

Oakland didn’t net the return many expected for a controllable pitcher such as Frankie Montas. Neither Volpe nor Oswald Peraza were involved in the deal.

Instead, Oakland adds the Yankees’ No. 5 prospect in that of pitcher Ken Waldichuk. It also picks up 10th-ranked prospect and fellow pitcher Luis Medina. Lefty J.P. Sears and second baseman Cooper Bowman complete the bounty headed to Oakland in this deal.

The 70th-ranked prospect in all of baseball, Waldichuk could very well replace Montas in the A’s rotation immediately. The 24-year-old is pitching to a 6-3 record with a 2.71 ERA while striking out 116 batters in 76.1 innings in between Double-A and Triple-A this season.

Medina is already throwing 100 miles-per-hour and pitching at Double-A. He’s struck out 81 batters in 72 innings while sporting a 3.38 ERA in 17 starts. As for the 26-year-old Sears, he’s seen action in seven games (three starts) with the Yankees this season and is pitching to a 2.05 ERA with a 0.86 WHIP.