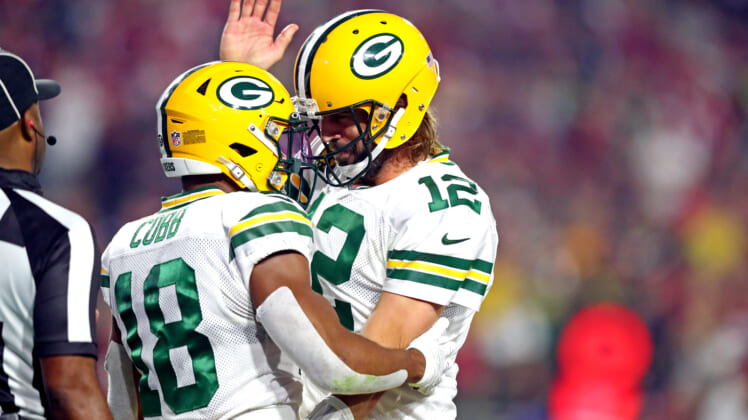 The Green Bay Packers will start the 2022 season in hopes of returning to Super Bowl glory. The team has not won a title since the 2010 season and is in the waning days of Aaron Rodgers‘ Super Bowl window. While a championship is the ultimate team goal, there are still some great individual milestones that several Packers players can hit this year.

For those wondering, Brett Favre holds the Packers’ franchise record for career passing yards with 61,655. If Rodgers plays next season, he will likely break the team record then. Rodgers also needs 51 touchdown passes to become just the fifth quarterback ever to throw 500 career touchdowns. This, too, will likely have to wait until next season.

Randall Cobb can move up the Packers’ all-time receptions list

The Green Bay Packers brought Randall Cobb back last offseason as a way to appease a disgruntled Aaron Rodgers. Now in his second season of his second stint with the team, Cobb has the chance to move further up the Packers’ all-time receptions list. He currently has 498 receptions in a Green Bay uniform, which ranks sixth in team history.

The last time Cobb played a nearly-full season was 2019 with the Dallas Cowboys. That year he had 828 receiving yards. Given his relationship and chemistry with Aaron Rodgers, he certainly could reach all of these milestones. The question is whether or not he will stay healthy.

Related: Three Green Bay Packers who could get traded during training camp

Aaron Jones currently ranks fifth in Packers’ history with 4,163 rushing yards. He needs only 35 to pass Tony Canadeo for fourth in team history. Gaining 837 yards on the ground would make him just the fourth Packers running back to rush for 5,000 yards with the team, and 862 would move him into third place ahead of John Brockington.