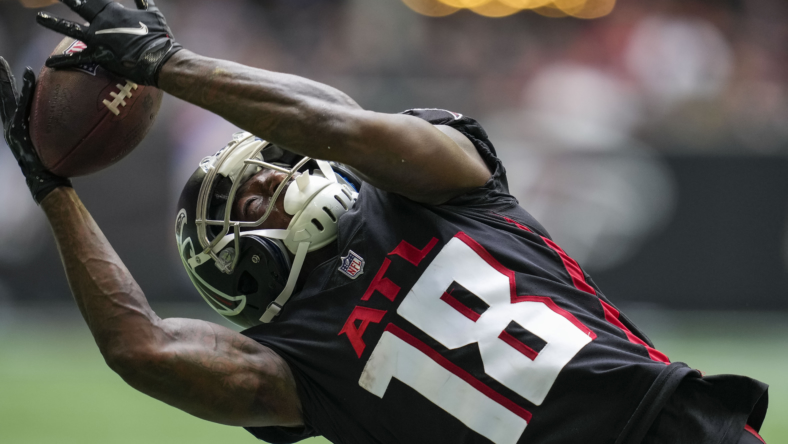 Calvin Ridley was all but forgotten about this far into the 2022 season. Once viewed as a top-emerging young wideout, Ridley’s entire season was wiped out due to his own dumb mistakes. Only now, Ridley gets a new chance, in a new atmosphere, being traded from the Atlanta Falcons to the Jacksonville Jaguars.

On a day full of stunning surprises, this may be the biggest yet. Ridley’s name had not been mentioned anywhere ahead of the NFL trading deadline, but here he’s been sent to Duval in exchange for draft compensation.

It’s a complex trade that has several conditions attached, as Adam Schefter points out.

Calvin Ridley’s debut with Jacksonville will have to wait

While Ridley’s atmosphere will be changing drastically, it won’t impact his availability for the season. The 27-year-old receiver is still suspended indefinitely for betting on pro football games he himself participated in last season. Chances are, Ridley will be reinstated and able to play by the start of the 2023 season, but that remains unclear.

When available, Ridley has shown he can be a 1A option, he did so by racking up 1,374 receiving yards in 2020 with the Falcons. Now heading to Jacksonville, that’s the exact role he’ll assume, becoming Trevor Lawrence‘s top weapon.

It’s a much-needed acquisition for a franchise that has improved its pass-catching corps in the past few seasons, adding Christian Kirk and Marvin Jones, but these were never solutions to provide their young QB with a No. 1 receiver. Ridley changes that almost instantly (suspension).

Now the Jaguars don’t have to be overly consumed with identifying a game-changing receiver in the 2023 NFL Draft class, if one is available, great, if not, they already have Ridley waiting at home.

While Ridley will turn 28 before he can take the field again, he’s already the best receiver on the team. Ridley has one more year on his contract, with him set to earn $11.1 million in 2023. Chances are, with a strong first impression in Jacksonville, he’ll have no issues securing a long-term extension.