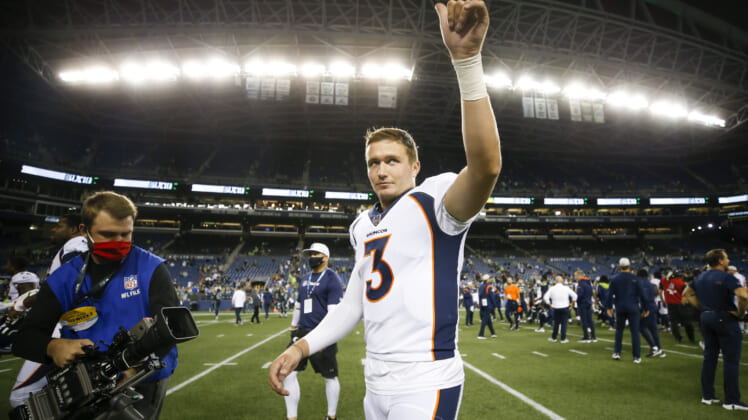 In a shocking turn of events, the Seattle Seahawks moved on from their franchise quarterback for the past 10 years, by trading Russell Wilson and acquiring Drew Lock in the same deal. Naturally, after such a blockbuster move, there’s been plenty of external speculation over who will be Pete Carroll’s starting quarterback in 2022. Yet, it could be someone who’s already on their roster, like Lock.

Initially after the Russell Wilson trade to Denver was completed, there was some belief that the Seahawks wouldn’t be done. As in there would be more quarterback moves to come. Although it shouldn’t be ignored that Drew Lock was included in the trade. After all, there has to be a reason, right?

According to ESPN’s Jeremy Fowler, the Seahawks didn’t see Lock as some cheap “throw-in” to the trade package that sent Russ out of town. In fact, they see him as their starter for 2022.

The report goes on to mention how the Seahawks front office views Lock differently, basically blaming the lack of stability on offense for Lock’s struggles.

“There’s a belief among some with Seattle that Lock’s issues in Denver were a byproduct of a revolving door of offensive coordinators and a defensive-minded head coach,”

On the surface, it’s an interesting thought. Lock is still just 25 years old and has 21 starts under his belt already. Lock showed some promise in his rookie season after being selected 42nd overall out of Missouri back in 2019. We’re only two years removed from when many saw Lock as a top quarterback draft prospect. Who’s to say there isn’t some hidden potential hidden somewhere within Lock’s frame?

After all, the Seahawks had extensive success with a former third-round pick with Wilson in town. We’re not saying Lock can immediately replace the production they enjoyed with Russ, but he likely still has some room to grow.

We’ll see whether this is just an early smokescreen ahead of the 2022 NFL Draft, or if Lock really is their guy. There have also been links suggesting the Seahawks could get involved in the Deshaun Watson sweepstakes, but those talks are contingent on the three-time Pro Bowl QB having a reciprocal interest in Seattle.

With Lock under contract for one more season, it appears as though the Seahawks will give him every chance possible to win the starting gig. But then again, that’s what we thought after they signed Matt Flynn in free agency before selecting Russell Wilson in the 2012 NFL Draft. There’s a lot of time separating now and the start of the 2022 season. Stay tuned.