The Detroit Lions have become notorious for two things. Failing to create a franchise that could consistently sustain success and constantly mishandling franchise icons. Across multiple regimes, the theme remained the same for the likes of Barry Sanders, Calvin Johnson, and Matthew Stafford.

This past offseason, the Lions moved on from their franchise quarterback of the last 12 years. While they acquired Jared Goff in the same deal, it also represented another organizational reset for a franchise that seemingly can’t get off the ground.

It won’t be the first time the team has had to search for a new face of the franchise in the past decade. The Lions had Megatron, one of the best players of his era. Recently, the Pro Football Hall of Famer revealed how the organization failed him and likely cost NFL fans even more years of greatness.

Let’s examine how the Lions’ mistreatment of their best players has led them to another organizational reset and derailed the potential legacy of an all-time great.

Disparity in treatment of Matthew Stafford vs. Calvin Johnson

In a recent interview, Johnson congratulated Stafford for landing with a new team. But he also expressed regret over not being allowed to play elsewhere, when he found himself in a similar situation.

“You know what, it sucked that they didn’t let me go, but they let Matthew go, but hey, you know, it is what it is,” said Johnson. “I’m not mad at Matthew; I love Matthew.”

The Hook co-host Tom Mazawey then asked Johnson if he would’ve gone to the Oakland Raiders, and that’s when Johnson chuckled and replied, “Man, I would’ve went anywhere.”

Johnson stated when it was time for him to retire, he asked the Lions front office if they would allow him to move on. And they denied his request.

“We asked would they release me or let me go to another team,” said Johnson. “They wouldn’t.”

Perhaps allowing Stafford to leave town represents a changing of the guard in Detroit. If so, it might be the first positive thing this organization has done and should give the fans hope. But it will take years to repair a damaged reputation.

Lions have developed an ugly reputation over the years

The Lions have earned a reputation for not being very player-friendly. While the Green Bay Packers are in the headlines now for the ongoing saga with Aaron Rodgers, that’s a single incident compared to decades of the Lions letting their franchise players down.

First, it was Barry Sanders retiring too soon, then it was Calvin Johnson. Now? It’s the player they selected No. 1 overall in 2009 asking for an out. Stafford may have gotten his wish, but the Hall of Fame players before him didn’t.

For players on the outside looking in, the Lions are the team to avoid. If they couldn’t successfully cater to two Hall of Famers and later their franchise quarterback, how will they treat everyone else?

Simply put, the Lions have been a terrible organization. Despite several attempts to start over from scratch, they can never sustain success. Perhaps their interpersonal relationships are a big reason why.

The NFL is a tight-knit group. When a player speaks to his agent about finding a new team, do you think agents will recommend the Detroit Lions based on the precedent this franchise has set with its mistreatment?

Probably not. Agents are more likely to try and land their clients in a situation where they will be respected and taken care of, not treated as property.

If player agents don’t hold some organizations or owners in high regard, it makes it that much harder to recruit free agents or entice star players to play there. If the Lions want to get back to being relevant, changing their reputation is a great way to start.

The ‘What If’ of Megatron’s legendary career

Calvin Johnson didn’t need to keep playing to earn his gold jacket, that much is obvious. With three first-team All-Pro selections, six Pro Bowl nods and a member of the 2010 All-Decade Team, Megatron left his mark in a short amount of time.

But that doesn’t stop those from speculating on what could have been.

Like Randy Moss, coaches and scouts have looked under every rock to try and find the next all-time great. But you just can’t teach Johnson’s size and speed. The fact remains, the world may never see another athlete built quite like Megatron.

When he was playing, some speculated on whether Johnson would be able to surpass some of Jerry Rice’s seemingly impossible-to-reach records. While that seems like a distant memory, we can’t help but wonder where Megatron’s stats would have ranked among the NFL greats had he played a few more seasons.

One example of his greatness was when Johnson reached 11,000 receiving yards quicker than any other player in NFL history (127 games). Even in a shorter career that saw him deal with injuries, that total ranks fourth in receiving yards amassed in a player’s first nine seasons.

He also still holds the record for most receiving yards over a three-year stretch in NFL history, racking up 5,137 yards from 2011-2013.

Johnson still holds the NFL’s single-season record for receiving yards, finishing with 1,964 in 2012. Despite hanging up his cleats early, he still ranks 32nd in all-time receiving yards,

If Johnson kept playing even three more seasons, averaging 1,000 yards per year, he would be among the top-10 in all-time leaders.

Averaging just over nine touchdowns per season, Johnson currently ranks 23rd all-time with 83 receiving touchdowns. Had he played three more seasons, with the same averages, CJ would have finished with exactly 100 TDs, good for a ninth-place tie in NFL history. 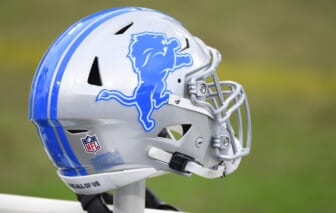 Johnson put his body on the line for every game of his storied Lions career, but when it came to the organization having his back? They were nowhere to be found.

At the peak of his career, Johnson was one of the most beloved players in the entire NFL. In 2012, Megatron beat out 42 players in a fan vote for the honor to grace the cover of Madden NFL 13. He was also well-respected by his peers, being ranked the second-best player on the list of NFL Top 100 players of 2014.

There was a time when Megatron was one of the most dominant gladiators on the gridiron, it’s just a shame we didn’t get the full experience thanks to the Detroit Lions’ stubbornness. For now, fans will have to stick to playing Madden to envision Calvin Johnson on a football field again.