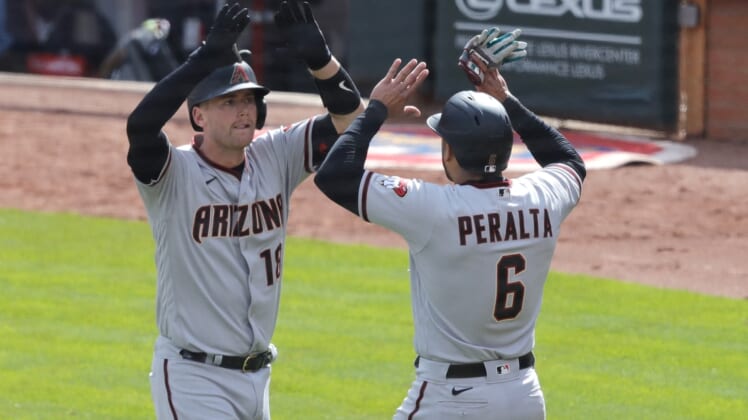 The 2021 MLB season has been a drag for the Arizona Diamondbacks. Sporting the league’s worst record (20-42), it’s reasonable to expect the organization to trade outfielder David Peralta before the deadline. Working along those lines, Fansided’s Robert Murray reports that the Diamondbacks are open to trade talks for the star.

Peralta, 33, is having a monotonous season. Owning a .246 batting average and a .713 OPS, he has struggled to get going at the plate. At the same time, the veteran slugger is a proven commodity who has produced runs at a plausible level in years past and is under contract through 2022. He has value and can help a contender.

Here are three teams that should trade for David Peralta.

Chicago may be the team to beat in the American League, but they’re not flawless. With Eloy Jimenez and Luis Robert nursing injuries, Peralta could step right into manager Tony La Russa’s starting lineup.

The lifelong D-Back has experience starting at both corner outfield positions. Adam Eaton has been unable to get on base by means of base hits at a reasonable level and Andrew Vaughn is a rookie. Peralta poses as good, if not better, options at both positions from an offensive and defensive standpoint.

Peralta adds a left-handed bat to a lineup that’s reliant on righty sluggers. He would bring balance, depth and experience to Chicago’s positional depth chart. There’s no reason for the White Sox to merely bank on what they have at their disposal. They should look to fill holes around their roster. They’re a Word Series contender and should operate like one on the trade market.

The knock on them pulling the trigger on a Peralta trade, though, would be that one or both of the injured outfielders could make a return later in the season and have nowhere to play.

Perhaps the biggest surprise of the first-third of the regular season, the Red Sox should be on the lookout for upgrades to make it back to the playoffs for the first time since their 2018 World Series championship. While they have a proven offensive attack, the Red Sox could use another outfielder.

Alex Verdugo has mostly split time in left and center field. Enrique Hernandez can play all over the diamond. Boston prefers J.D. Martinez to be the designated hitter, if possible. Peralta could be Boston’s left fielder for the remainder of the season, permanently moving Verdugo to center and Hernandez to a super utility role. Another option is Peralta beginning as the fourth outfielder and moving into the starting lineup if/when someone struggles.

Ironically, the Red Sox are winning with a scrappy starting rotation while their offense lacks a bit when compared to their outputs over the last three seasons. Peralta shores up manager Alex Cora’s outfield rotation and roster as a whole.

Boston doesn’t have the necessary pieces to begin a full-fledged rebuild, which made its best chance at moving in the right direction going all in on a veteran team this season. It’s working. That said, it’s possible Boston passes on a Peralta trade, as it may prefer to not take away from a developing farm system and choose to bank on the team’s offense performing better.

The Yankees are an enigma wrapped inside an enigma. Trying to figure out their team of late is like trying to solve a Rubik’s Cube. One way or another, they need to make a move to spark something (literally, anything). Peralta would be a savvy pickup for their sake.

Outside of Aaron Judge, New York’s outfield rotation has been a mess. Aaron Hicks is out for the season with a wrist injury. Brett Gardner and Clint Frazier are struggling mightily at the plate. Manager Aaron Boone has even tried infielders Miguel Andujar and Tyler Wade in the grass.

One could argue that the toolkit Peralta brings to the table is precisely what the Yankees need. Manager Aaron Boone has a right-handed heavy lineup that would benefit from a left-handed bat as it would add offensive variety. Meanwhile, Peralta could be the Yankees’ left fielder for the remainder of the season and play right on days Judge gets a day off.

Peralta shouldn’t command anything too rich for the Yankees’ liking via trade given the season he’s having and the contract attached to his services. In other words, they can keep their top prospects and not have to remove a significant piece from their big-league roster to add another bat to the mix. Peralta won’t solve their problems, rather he’d give the Yankees something new to work with.