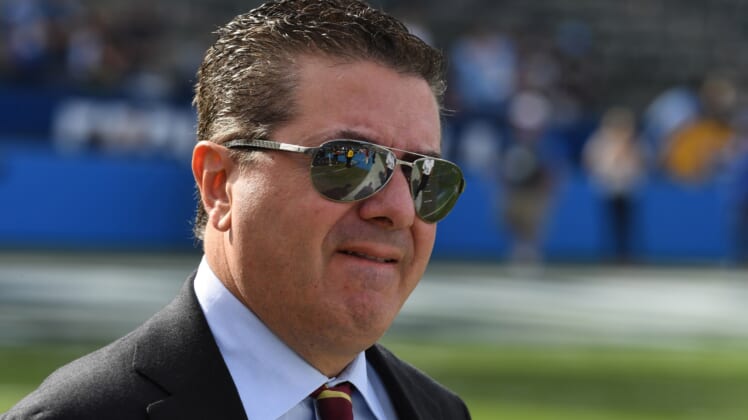 As the Washington Football Team has enjoyed a breakthrough season on the field under head coach Ron Rivera, team owner Daniel Snyder and the organization continue to land in hot water.

Following reports of a $1.6 million settlement paid by the franchise over a sexual misconduct allegation in 2009, Snyder has responded with accusations of extortion by one of the club’s minority owners.

The New York Times reported on Dec. 19 that Washington Football Team owner Daniel Snyder settled a sexual misconduct allegation against him from a former team employee in 2009. The incident allegedly occurred on Snyder’s plane during a return flight from the Academy of Country Music Awards in Las Vegas.

While two investigations reportedly found no substantiative evidence to support the woman’s allegations, The Washington Post learned that Snyder still paid a $1.6 million settlement to her. The team’s minority owners, Frederick Smith, Robert Rothman and Dwight Schar, called the allegations “a serious accusation of sexual misconduct.”

Now, in a filing submitted to the U.S. District Court in southern Maryland, Snyder is accusing minority team stakeholder Dwight Schar of extortion and trying to force him into selling the team.

Snyder and the Washington Football Team’s minority owners have been battling for months. The ongoing saga between the business partners in the spring, per the New York Times, when Snyder refused to distribute dividend payouts to his partners. Ever since, things have gotten ugly between the two sides.

Minority owner Frederick Smith, CEO of FedEx, joined numerous investors who threatened to pull their money if Snyder didn’t change the team’s name. Eventually, after years of refusing to change it, he relented.

The club’s minority stakeholders tried selling their shares of the team this summer. They ultimately reached agreements with a buyer, arranging to sell their collective 40% stake in the team for $900 million. However, Snyder has interfered by attempting to block the sale and there is now a suit in the U.S. District Court.

It’s a decision that the NFL and other team stakeholders aren’t happy about. Typically, ownership disputes are handled by the NFL’s arbitrator and it doesn’t become a legal matter. However, that is changing given the hostile sentiments between Snyder and the minority owners.

Snyder is pushing back with his own filing, at a time when his organization faces several alarming allegations.

In July, the Washington Post released a bombshell story detailing numerous allegations of a toxic culture in the Washington Football Team, one that allowed sexual harassment and mistreatment for years under Daniel Snyder’s watch.

In the story, it highlighted an organization that allowed frequent unwelcome overtures, sexual comments, verbal abuse and countless incidents of sexual harassment. Snyder released a statement shortly after the news came out and the team is conducting an investigation.

A month later, more damning allegations emerged against Snyder and the organization. The team’s senior vice president Larry Michael was accused of ordering the production of NSFW videos, featuring the cheerleaders in compromising situations with lewd outtakes, that were kept without consent and given to Snyder.

The Washington Post interviewed more than 100 current and former employees, paired with reviews of internal documents. The story featured 25 women coming forward, with some speaking on condition of anonymity due to nondisclosure agreements. They all described sexual harassment experienced from within the organization.

Recently, new accusations came out against Snyder. It further highlighted the problematic culture within the organization, with frequent mistreatment of women employees. Snyder also allegedly threatened the team’s former director of the cheerleading squad.

For now, Daniel Snyder is expected to remain the majority owner of the Washington Football Team. With how difficult it can be for the NFL to force an owner to sell and since Snyder is devoted to controlling the team, he will likely remain in power for years to come.