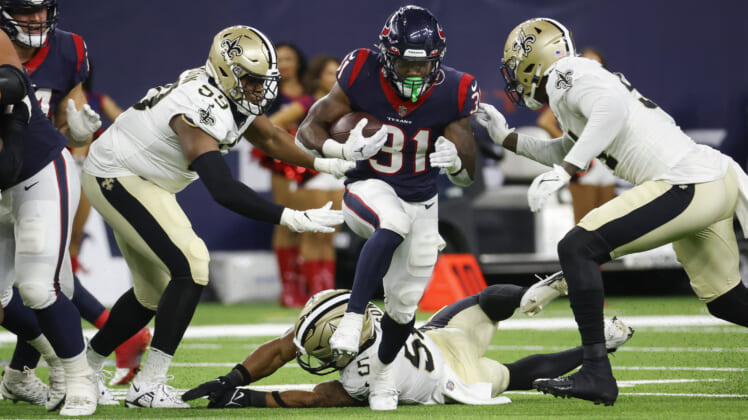 When the Houston Texans started training camp, they had a three-headed monster leading the way on their running back depth chart. If they weren’t headed for a committee, Marlon Mack and Rex Burkhead appeared to be frontrunners to earn the starting role. That may not be the case. Instead, it’s rookie Dameon Pierce who seems to have run away with the leading gig.

The latest evidence came on Friday night, when Pierce was nowhere to be seen, as a healthy scratch in the team’s second preseason game. Interestingly, both Mack and Burkhead saw playing time and received a few carries apiece. But not Pierce.

Head coach Lovie Smith indicated this decision was made because the team had already seen enough of Pierce last week and wanted to get a peek at a few of the team’s other rushers.

Though Pierce was the team’s leading rusher in their first preseason game, maybe coach Smith determined he had seen enough from the team’s fourth-round pick from April.

Related: Texans QB Davis Mills to be Year 2 stand out, a look at why

Dameon Pierce can bring a power running game to Houston

Pierce has seen quite the ascension up the depth chart, but it’s not unprecedented, especially for a running back. We’ve seen the likes of Arian Foster and James Robinson climb the charts from undrafted rookies to legitimate starters, even when the Jaguars had Leonard Fournette on the roster at the time in Robinson’s case.

While Pierce’s potential starting status isn’t a complete shock, as he’s always been seen as someone who could eventually overtake Mack and Burkhead for an extensive amount of playing time, few anticipated this outcome to begin the year.

Still, Pierce’s emergence is likely the best development for the team. They know what Mack and Burkhead can offer, but maybe Pierce’s ceiling is higher than both of the veterans? That’s saying something considering Mack is a former 1,000-yard rusher.

Pierce measures at 5-foot-9, 215 pounds, and he’s not the quickest back out there, having run a 4.59 40-yard dash at the NFL Scouting Combine, so he may not have breakaway speed. But we saw in Week 1 of the preseason Pierce has enough burst to be effective, and once he does make contact, defenders will feel his wrath.

As coach Smith mentioned after Pierce’s NFL debut, the rookie has already shown he can “run with power, he can make you miss, and he can cut on a dime“. If all these things prove to be true, the Texans may have their running back of the future already on the roster with Pierce.

In a year where the Texans are trying to see how good Davis Mills can be as he enters his second season, the 2022 football schedule will be all about seeing which players can be franchise cornerstones. Maybe Pierce can etch his name on that list.

The Texans’ regular season kicks off Sunday, September 11, when the Indianapolis Colts pay a visit to NRG Stadium. That will be our first chance to see how coach Smith handles the running back depth chart and if Pierce will be the first back to take the field.