The Dallas Cowboys could select Dak Prescott heir-apparent No. 10 overall in 2021 NFL Draft 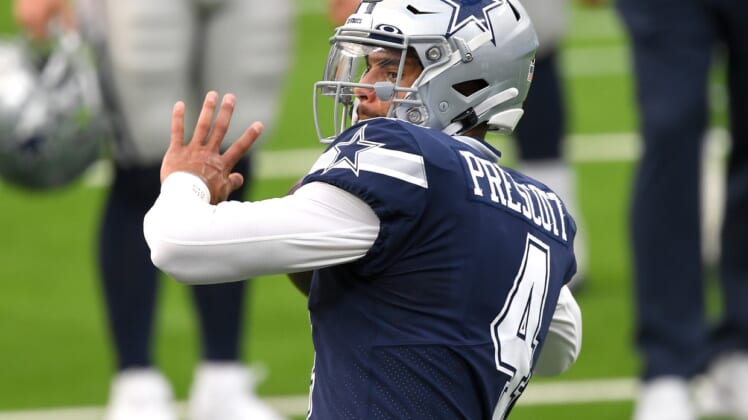 The Dallas Cowboys are walking a tight rope when it comes to Dak Prescott contract talks. Most-recent NFL rumors suggest that the two sides are far apart in conversations mere months after Prescott suffered a brutal ankle injury that ended his 2020 season five games in.

It’s been a longstanding issue for Dallas and its franchise quarterback. In fact, contract talks between Dak Prescott and the Cowboys have been going on for over a calendar year.

Facing a deadline within the next two weeks regarding placing the franchise tag on Prescott or letting him hit NFL free agency, the Cowboys are running out of time. It’s now leading to speculation from within that Dallas might move off Prescott altogether.

“I’m the first person to agree with you that the Cowboys need to have this situation sorted out by the time the draft rolls around. But the reason I think that is because, if they can’t get Dak signed long-term by April, they need to be thinking about using a first-round pick on a quarterback,” David Helman of the Cowboys’ official website noted. “They already developed a fourth-round pick into a star quarterback – his name is Dak Prescott. The odds of doing that again are slim to none. If they don’t pay Dak, they need to be ready to invest much bigger assets into finding his replacement.”

That’s the first we’ve heard of this. And it comes from a reporter employed by the Dallas Cowboys. That’s not something to take lightly.

Dallas is selecting No. 10 come April. The top-three quarterbacks in Trevor Lawrence, Zach Wilson and Justin Fields are all going to be off the board. North Dakota State’s Trey Lance could be an option. Meanwhile, former Alabama star Mac Jones would likely be seen as a reach within the top-10.

If the Cowboys were to place the franchise tag on Dak Prescott ahead of the March 9 deadline, it would cost them roughly $38 million against the cap in 2021. That’s obviously a less-than-ideal scenario.

As noted above, it’s a possibility. While unlikely in the grand scheme of things, tagging Prescott in order to trade him could net the Cowboys a first-round pick and change in return.

In turn, that could be used to either trade up in the draft with Zach Wilson and Justin Fields being a target. There’s also a scenario in play here that the Cowboys get in on the Deshaun Watson sweepstakes. Acquiring a first-round pick for Prescott would enable them to kick the tires on that with Ezekiel Elliott joining multiple first-round picks heading back to the Houston Texans.

Regardless, it’s pretty clear that the Dak Prescott situation is far from settled. If the two sides are unable to come to terms on an extension over the next three weeks, it’s going to lead to some crazy Cowboys rumors. That’s for sure.

Click below for more Dallas Cowboys news and rumors.