Alex Smith baffled by Colin Kaepernick not playing in NFL 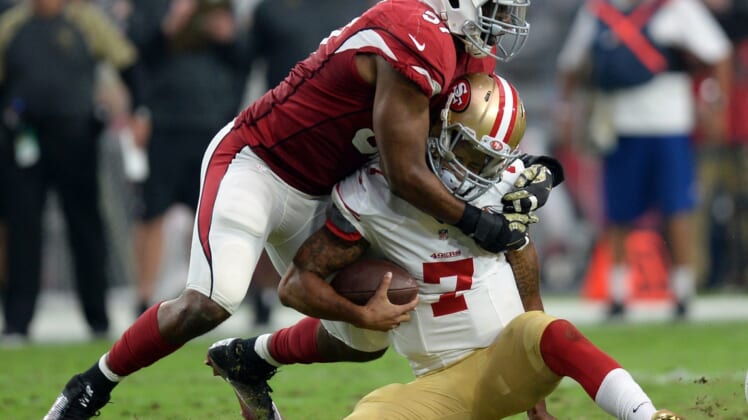 When Colin Kaepernick last played in the NFL, Alex Smith was the Kansas City Chiefs starting quarterback and years away from a gruesome leg injury. Fast forward to 2021, with Smith eyeing opportunities for his age-37 season, Kaepernick’s former teammate remains baffled that he is not on an NFL roster.

It was Kaepernick who replaced Smith in the 2017 season following a concussion. In just his second NFL season, Kaepernick thrived with the San Francisco 49ers. The team went 5-2 under his direction, with the young quarterback posting a 10-3 TD-INT ratio, rushing for 415 yards and becoming one of the league’s breakout stars on the way to a last-minute Super Bowl XLVII loss.

Everything changed for Kaepernick in 2016. He, along with teammate Eric Reid, kneeled during the national anthem to raise awareness for racial inequality and police brutality in the United States. After becoming a free agent that offseason, he would never play another snap in the NFL.

Since Kaepernick’s peaceful protest led to him being kept out of the league, Smith has gone through his own career roller coaster. Kansas City traded him to the Washington Football Team in 2018, clearing the way for Patrick Mahomes to take over. In Washington, Smith started out strong and then a devastating injury nearly resulted in his leg being amputated.

Many assumed the former No. 1 overall pick’s career would be over. At times during the 2020 offseason, it even seemed like Kaepernick might return to the field before Smith did. But Kaepernick remained a free agent the entire year, without a single workout with a team, while Smith reclaimed his gig as Washington’s starting quarterback.

In an interview with Kyle Brandt, Smith admitted he was baffled by Kaepernick being out of the NFL since 2016 and said it still “doesn’t make sense” to this day. He also believes the United States and the league weren’t ready for the issues Kaepernick raised and believes it was responsible for the backlash.

After two years out of the league, despite his desire to play, the NFL settled a collusion lawsuit with Kaepernick. He remained out of the league, with his name rarely even mentioned in rumors or discussions. However, following the death of George Floyd and greater support for the Black Lives Matter movement, things changed.

Players started expressing regret for not supporting Kaepernick, coaches accepted fault for not signing him and the league changed its own views. There was a shift in tone around the NFL, with commissioner Roger Goodell publicly supporting the Black Lives Matter message and supported players’ rights to kneel during the anthem.

Ultimately, it never led to his return. Later speculation hinted the interest from teams was fake and an NFL return remains unlikely. While Smith and many other NFL players believe Colin Kaepernick should still be playing football, it seems that opportunity will never come.