Report: ‘Shift in tone’ around NFL regarding Colin Kaepernick 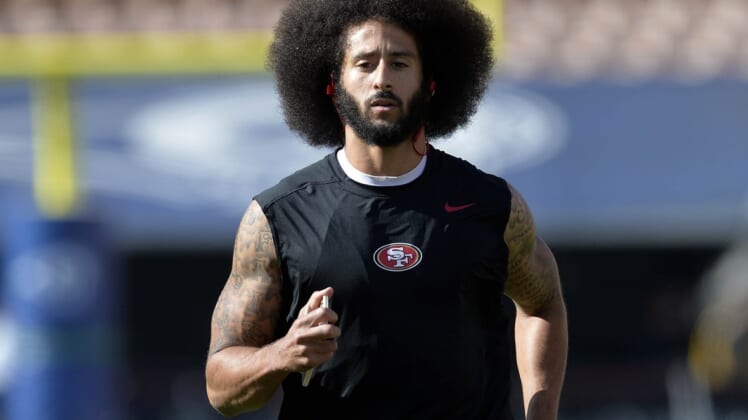 NFL commissioner Roger Goodell recently admitted he and the league got it wrong about players protesting during the national anthem and apologized for how players were treated. Now, in the days following Goodell’s statement, the NFL’s stance on Colin Kaepernick also seems to be changing.

As current and former players, along with an NFL head coach, offer their support for Colin Kaepernick, the NFL seems to be taking notice. Less than a year after Goodell said the league moved on from Kaepernick, his name is being discussed more and more around the league.

Multiple NFL employees told The Athletic’s Lindsay Jones and Jourdan Rodrigue said they sensed a shift in the league’s tone regarding Kaepernick. Whereas the former star quarterback’s name used to feel taboo to mention in prior years, his name is coming up more and more during staff meetings.

There also seems to be some increased hope that an NFL team could sign Kaepernick this year. Recently, Seattle Seahawks head coach Pete Carroll said he knew of at least one team that was interested in the 32-year-old quarterback.

The growing support for Kaepernick includes NFL stars that were previously against his decision to kneel during the national anthem. However, following the recent death of George Floyd in police custody, there seems to be more understanding.

Despite not playing since 2016, Kaepernick continues to train daily for another opportunity. He is reportedly in the best shape of his life and working towards a return to the NFL.

While no NFL team has expressed public interest in signing Kaepernick, fits could be found across the league. He remains a great athlete and even in his final season, playing on one of the NFL’s most depleted rosters, Kaepernick still posted a 16-4 TD-INT ratio with a 90.7 quarterback rating.

He could be an ideal fit for teams like the Seattle Seahawks, Baltimore Ravens or Buffalo Bills. All three clubs could use another reliable backup quarterback, especially with some coaches considering quarantining a third quarterback this season.

If Kaepernick wants an opportunity to compete for a starting job, the New England Patriots and Los Angeles Chargers jump out as possibilities. He could challenge Jarrett Stidham or Tyrod Taylor, while bringing experience to the locker room.