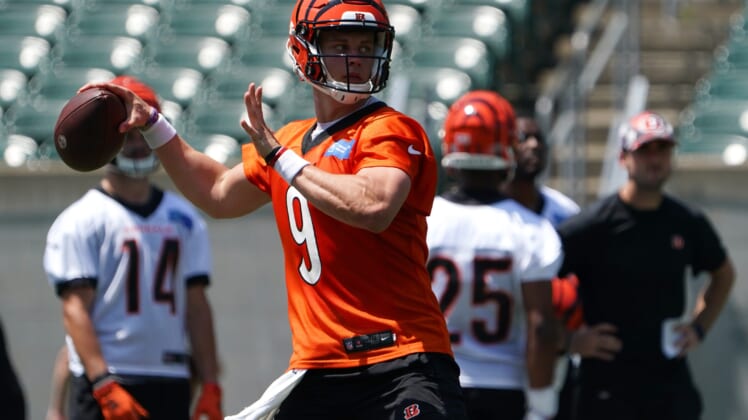 After outperforming everyone’s expectations a season ago, reaching the Super Bowl for the first time in 33 seasons, now the goal is to get back to the biggest stage, wrapping up by hoisting the Lombardi Trophy.

By all appearances, the Bengals have an improved roster over last season and the dynamite pairing of Joe Burrow and Ja’Marr Chase isn’t slowing down any time soon. But just like last year, they still need to go out and prove it, that’s why they play the games. Now the Bengals need to re-earn their stripes, proving last year wasn’t a fluke. But this is where it all begins, in training camp.

Rookies start reporting to Cincinnati Bengals training camp on July 26, with veterans trickling in on July 29.

Here are the days when the Bengals will have practices that fans can attend:

The Bengals will be returning to Paul Brown Stadium for their training camp practices for the 11th time in franchise history. It’s the same place they play their football games during the year, so fans and players should have an easy time finding their way to the stadium.

Here is the full history of where the Bengals training camps have taken place in the franchise’s history per Pro Football Reference.

Related: If you’re a fan of the Bengals, check out Bengals rumors, rankings and news here

Can you go to Bengals training camp?

Yes, 12 Bengals practices will be open to the public, meaning spectators can attend Bengals training camp. All practices begin at 2:15 PM, and fans can start entering the gates at 1:30 PM.

Bengals Back Together Saturday

One event returning in 2022 is Bengals Back Together Saturday, which will take place on July 30, when fans will get to see the Bengals practice inside Paul Brown Stadium.

Here are the top storylines and Bengals position battles to follow in training camp this summer.

The biggest news expected to come out of Bengals training camp this fall was supposed to be a potential contract extension for safety Jessie Bates III, who’s currently set to play the season on the franchise tag for $12.9 million in 2022. The team wants him back, and Bates wants to be in Cincinnati long-term, but they’ve been unable to find common ground on contract value to date.

Now with the deadline passing for franchised players to sign extensions, with Bates’ future up in the air, it could impact the locker room. Another possibility, even if it’s not the best solution for everyone involved, would be a trade sending Bates out of town. But that’s unlikely as the team wants to build the best roster possible in anticipation of another deep playoff run.

After Bengals director of player personnel Duke Tobin made safety Daxton Hill the 31st pick in the 2022 NFL Draft, the rookie figures to have a fairly important role in his first year. But just where will he come in to play?

Vonn Bell wasn’t exactly a weakness for the defense last season, finishing with a 74.2 Pro Football Focus player grade, where he ranked even higher in coverage (78 grade). While Jessie Bates III and the Bengals have yet to work out a long-term extension, chances are, his spot is set in stone as well.

So maybe Hill competes with Bell for the other starting role, or maybe Hill finds extra playing time as a nickel or dime back in select packages. Wherever the Bengals play him, expect to see Hill receive plenty of chances to see the field.

When you reach the Super Bowl, you don’t have many starting positions up for grabs. But one area fans will have an eye on is special teams. Punter Kevin Huber has held it down for the past 13 seasons, but at 36, his play has begun to slip.

A season ago, Huber’s net average ranked 21st out of punters with at least 34 punts. Perhaps this is why the Bengals also have Drue Chrisman back to compete with Huber.

We also have a long-snapper battle, with Clark Harris hoping to hold off undrafted rookie Cal Adomitis. They may not be the most exciting camp battles out there, but they could make a big difference throughout the season.