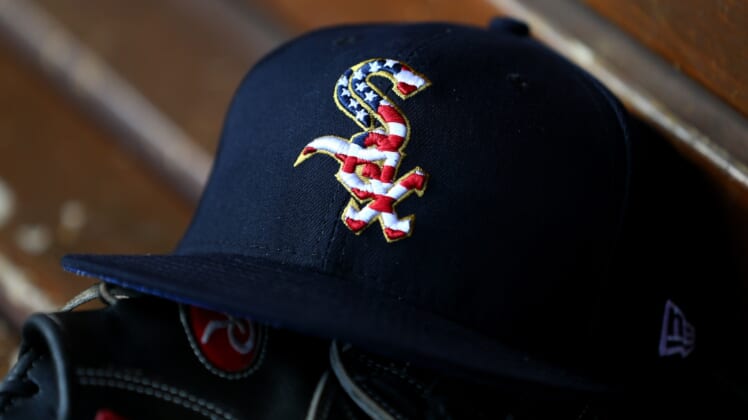 Jul 3, 2018; Cincinnati, OH, USA; A view of the American flag in the Sox logo on an official White Sox New Era on field hat during the game of the Chicago White Sox against the Cincinnati Reds at Great American Ball Park. Mandatory Credit: Aaron Doster-USA TODAY Sports

The Chicago White Sox sit atop the AL Central comfortably with the MLB trade deadline approaching, but injuries put the club’s World Series hopes in jeopardy. If the White Sox want a shot at hoisting their first World Series title since 2005, moves need to be made.

Chicago’s success this season is remarkable when considering the players that went down. Potential All-Star candidates Eloy Jimenez and Luis Robert suffered significant injuries that will sideline them for at least another month. Meanwhile, Nick Madrigal went down with season-ending surgery.

The blows to the White Sox lineup were sustained for a few weeks, but recent cold stretches from Jose Abreu and Yoan Moncada have cooled this team’s run production down. Fortunately, there are options to consider as we look ahead to July 30.

Chicago is trying to patch a hole at second base. While Madrigal didn’t hit for much power, he was an OBP machine and played respectable defense at the position. Danny Menddick (.315 OBP, 77 wRC+) and Leury Garcia (85 wRC+, -1.2 Def) can’t be trusted in either department.

The White Sox have tried multiple times to acquire Eduardo Escobar, at one point coming very close to a deal. While the Arizona Diamondbacks are holding out for more right now, that’s likely to change as the MLB trade deadline nears. An Eduardo Escobar trade is a guarantee.

While Escobar doesn’t get on base a lot (.295), he hits for power and drives in runs. The 32-year-old could spell Moncada at third base on some days. When Moncada is healthy, Escobar is a solid defensively at second base. Plug him in as the No. 6 hitter and his .799 PS with runners in scoring position will provide a boost for Chicago.

The Liam Hendriks contract is working out nicely with the All-Star closer routinely shutting the door when called upon in the 9th inning. Paired with Garrett Crochet (2.81 ERA) and Michael Kopech (1.72 ERA), Chicago boasts three outstanding relievers. As the MLB playoffs always show, that isn’t enough.

Ian Kennedy serves as the closer for the Texas Rangers, but he could thrive just as easily working as a set-up man. The 36-year-old is dominating opposing hitters this season, posting a stellar 21.4% K-BB rate and registering a .238 batting average allowed. He’s best in high-leverage situations, with batters posting a .161/.257/.410 slash against him.

Adding Kennedy to the bullpen would give the White Sox a ton of flexibility. Kopech, a former top starting pitching prospect, could operate in a multi-inning role as the bridge to Hendriks and Kennedy. As for Crochet, the southpaw would be an electric specialist against left-handed batters.

There’s an increasing likelihood at least one of Robert or Jimenez returns in August. Robert’s return covers the need in center field and Jimenez will likely transition to designated hitter after what happened to him in left field. It would still leave the White Sox needing more help in the corners.

Duvall is an ideal option for a team seeking some right-handed pop. While he’s not as great as he used to be defensively, Duvall still rates in the 94th percentile for sprint speed and is an above-average left fielder. He also crushes right-handed pitchers to the tune of 14 home runs, a .804 OPS and a 119 wRC+ this season.

When Chicago faces righties, which it would see a lot of in October, Duvall is a superior option to Adam Eaton. Pair this rotation and bullpen with a lineup that features Moncada, Abreu, Escobar, Andrew Vaughn, Tim Anderson and Duvall. That’s a team with a shot to win the American League.