The Chicago Bears have pursued an Allen Robinson contract extension for over a year and with a crucial deadline approaching it seems the two sides are no closer to a resolution.

Chicago originally signed Robinson in 2018, agreeing to a three-year deal worth $42 million. It came just months after he suffered a torn ACL in his left knee, but the franchise was confident he would rebound and play like one of the NFL’s top receivers.

The Bears have gotten even more than they paid for. Despite poor quarterback play holding this offense back, Robinson has been an outstanding weapon. After a relatively quiet 2018 season, which was expected given the return from knee surgery, Robinson has been great the past two years.

Entering his age-28 season, Robinson was set to hit the open market this spring. But with head coach Matt Nagy and general manager Ryan Pace operating with their jobs on the line this year, Chicago placed the $18 million franchise tag on its Pro Bowl receiver and he signed the tender. 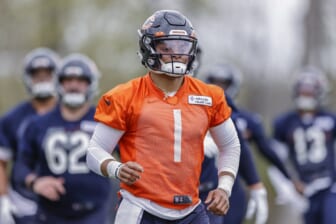 The Bears have until July 15 to sign Robinson to an extension. However, per NFL Network’s Tom Pelissero, it’s very unlikely that the two sides reach an agreement on a long-term deal.

Robinson wants to become one of the highest-paid wide receivers in the NFL. Given his franchise tender is worth $18 million guaranteed and Kenny Golladay signed a four-year, $72 million contract with the New York Giants, many around the NFL view it as a reasonable desire.

But the Bears reportedly aren’t as willing to make that kind of financial commitment. As a result, Robinson will almost certainly play out the 2021 season on the franchise tag. After that, he’ll have a chance to test NFL free agency in 2022.

Considering placing the tag on Robinson would cost Chicago even more next season, 120 percent of his 2021 salary, this will be his last season in Chicago. For a team that wants to build around Justin Fields, the future at wide receiver is concerning.