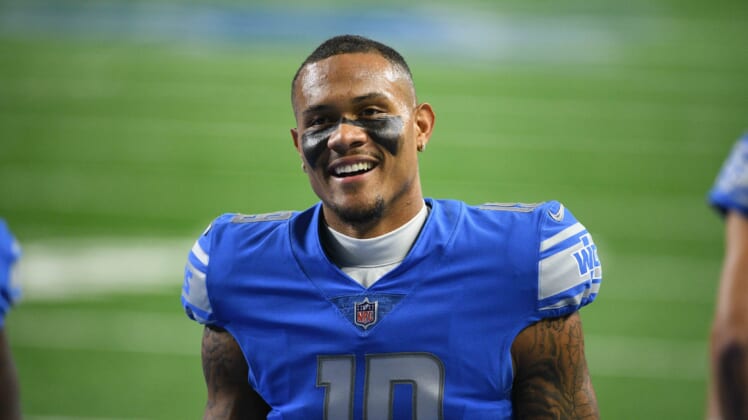 The New York Giants signed free-agent wide receiver Kenny Golladay on Saturday, as the top pass-catcher on the open market took his talents to Broadway on a four-year contract worth a reported $72 million.

Golladay can make as much as $76 million, and joins an intriguing offensive core led by running back Saquon Barkley and quarterback Daniel Jones. The Giants’ chances of winning the wide-open NFC East in 2021 have suddenly increased with one splashy move.

NFL Network’s Ian Rapoport reported on the contract details of Golladay’s huge payday, which includes $40 million guaranteed, and added what transpired behind the scenes as Chicago was in hot pursuit:

It’s unclear how the Bears would’ve been able to afford Golladay and keep Allen Robinson on with the franchise tag, or why Golladay would agree to play in the Windy City with Andy Dalton as his quarterback.

For all the criticism Jones fields as New York’s field general, the G-Men offer plenty more upside, not to mention New York’s even-larger media market for Golladay to increase his off-field upside as well.

One of the main talking points in recent days about Golladay’s match with the Giants is how well Jones does in throwing the deep ball.

The 6-foot-4 Golladay was routinely making difficult contested catches and creating downfield separation as a member of the Detroit Lions with Matthew Stafford airing it out to him.

Pro Football Focus’ unofficial Giants Twitter account highlighted how perfect of a match Golladay and Jones appear to be on paper:

Worth noting is the fact that Golladay actually had the second-most yards on deep passes in 2019 when Stafford started only half of the Lions’ games. An injury-plagued season this past year obviously didn’t hurt Golladay’s open-market value, as New York general manager Dave Gettleman landed a legitimate No. 1 receiver.

Provided Barkley comes back strong from a torn ACL to spearhead the rushing attack and Jones can benefit from having a go-to target like Golladay on the outside, this Giants offense should look a lot different for the better this next season.

But with all the hype that inevitable accompanies Golladay’s arrival to the Big Apple, there should be some caution heeded amid the obvious optimism.

In order for a unique, deep-ball playmaker like Golladay to connect with Jones as often as possible — and for Barkley to flourish as a ball-carrier, for that matter — it starts up front. Gettleman knows this, which is why he invested a high first-round pick in left tackle Andrew Thomas last year.

The problem is, Thomas was atrocious as a rookie, and did little to help Jones as a blindside pass protector. It led to an exacerbation of Jones’ alarming ball security issue, as the 23-year-old coughed up 11 more fumbles to go with the 18 from his first year in the NFL.

No one really played well up front for New York, and at least in free agency, Gettleman has done little to address that glaring problem. Opt-out veteran Nate Solder is returning for 2021, yet that’s hardly enough to count on for a unit that ranked 31st out of 32 teams in PFF’s final 2020 o-line rankings.

Jones, Barkley and Golladay are going to have problems if there isn’t marked improvement in the trenches. Given how expensive Golladay was, it’s unclear how New York is going to fix its glaring area of weakness from last season. There must be a greater plan at work, or a schematic adjustment to be made.

Whatever the case may be, Giants fans won free agency today, and have three legitimate wideouts in Golladay, Sterling Shepard and Darius Slayton.