Case Keenum passed for 199 yards and one touchdown while starting in place of injured Baker Mayfield, and he led the Cleveland Browns to a 17-14 victory over the visiting Denver Broncos on Thursday night.

D’Ernest Johnson rushed for a career-best 146 yards and a touchdown in his first career start for the Browns (4-3). Johnny Stanton caught his first career scoring pass as Cleveland halted a two-game losing streak.

Denver’s Teddy Bridgewater completed 23 of 33 passes for 187 yards, two touchdowns and one interception while playing on an injured foot. Melvin Gordon and Javonte Williams caught touchdown passes for the Broncos (3-4), who lost their fourth consecutive game. 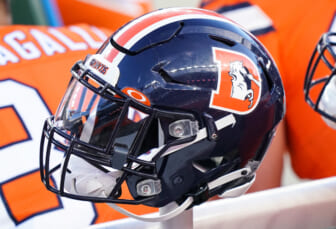 Also Read:
3 trades the Denver Broncos must consider to save lost season

Cleveland outgained Denver 376 yards to 223 as Keenum made his first start since the final week of the 2019 season for Washington. He completed 21 of 33 passes while Myles Garrett recorded 1.5 sacks to raise his NFL-best total to 9.5.

Johnson carried 22 times and also caught two passes for 22 yards. He had three rushes this season entering the contest and 40 in his three-year career.

Denver possessed the ball for just eight minutes and 49 seconds in the first half while falling behind 10-0. However, the Broncos opened the third quarter with a 13-play, 79-yard drive and capped the excursion with Bridgewater’s 8-yard scoring pass to Gordon.

The Browns responded with an equally impressive drive in which they moved 75 yards on 13 plays. Keenum ended the drive with a 1-yard toss to Stanton to make it 17-7 with 27 seconds left in the third period.

Denver later pulled within three as Bridgewater threw a 10-yard touchdown pass to Williams with 5:17 remaining in the game to cap a 17-play, 80-yard excursion.

The Broncos never saw the ball again as Johnson (52 yards on seven carries on the drive) helped the Browns run out the clock.

Cleveland led by just 10 at halftime despite outgaining the Broncos 214 to 76 and having 12 first downs to Denver’s two.

The Browns ripped down the field on a five-play, 75-yard drive to start the game. Johnson capped it with a 4-yard scoring run.