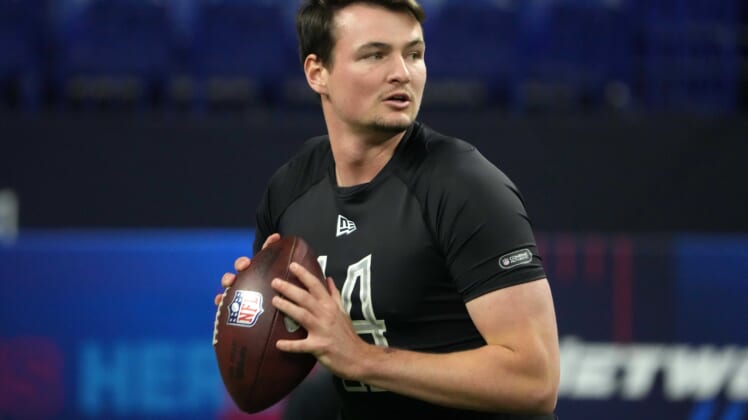 The Philadelphia Eagles have a new quarterback named Carson, but fans can relax because Wentz isn’t making a comeback. Instead, general manager Howie Roseman managed to snag one of the top remaining undrafted free agents, reaching a deal with Nevada quarterback Carson Strong, as reported by Kirsten Mowan.

Strong, who was regarded as a mid-round pick in the pre-draft process, lands with a team who’s been sniffing around the quarterback market all offseason despite having Jalen Hurts and Gardner Minshew II on the depth chart already.

Now he faces a tough road ahead, but we’ve seen the Eagles make moves in the preseason before, it’s not out of the realm of possibilities for Strong to grab a hold of the backup gig. It’s possible the Eagles are looking to a future after Minshew with the fourth-year pro entering the final year of his rookie contract. Or if another team is intrigued with Minshew’s skillset later on, having Strong on hand could make them more likely to accept a trade offer.

There were some medical concerns that emerged about Strong’s knee before the draft began. It’s possible teams weren’t comfortable with his injury history, causing him to fall out of the draft altogether, but if he can prove to be healthy, the Eagles might have added one of the best deep ball throwers in the draft class.

The Eagles also have Reid Sinnett on the roster, who has yet to throw a pass in the NFL after entering the league as an undrafted free agent in 2021.