The Carolina Panthers are rumored to be interested in signing Dwayne Haskins. After facing him in Week 16, the question is: Why? 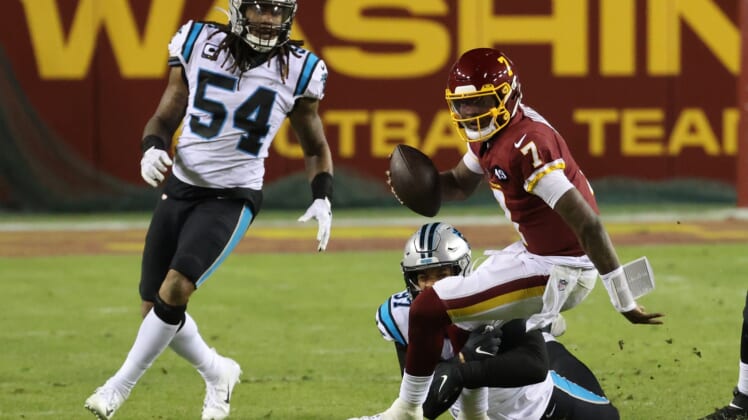 The Carolina Panthers need to upgrade their quarterback room regardless of which direction they choose to go in the 2021 NFL Draft, and recently released Washington Football Team signal-caller Dwayne Haskins is rumored to be on their radar.

Haskins was a 2019 first-round pick and has plenty of arm talent to justify the selection. Unfortunately, maturity issues plagued his preparation and off-field behavior, leading to his unceremonious exit from the nation’s capital. That isn’t stopping Carolina and others from being interested in him.

NFL Network insider Ian Rapoport reported on Wednesday that Haskins is receiving interest from “several” teams and named the Panthers specifically as one of them.

Carolina already has Teddy Bridgewater under center, who’s quite the opposite of Haskins in almost every conceivable way. With a lengthy history in the NFL, an ability to play winning football without making costly mistakes and the mental strength to battle back from a career-threatening knee injury, Bridgewater is an ideal player to establish a winning culture.

In stark contrast, Haskins has the cannon for an arm to execute special throws Bridgewater simply can’t dream of making. With that comes baggage, however, in the form of an obviously lacking work ethic, no perspective on what it takes to be a pro, and the fact that he’s coming from a losing culture in Washington that only recently improved under new coach Ron Rivera.

What’s perhaps most surprising is that the Panthers are interested at all. They just faced off against Haskins in Week 16 and saw him go 14-of-28 passing for 154 yards and two interceptions. What was there to be impressed by, exactly?

Haskins already has some work to do beyond himself, as he and his agent recently parted ways, per ESPN’s Adam Schefter. The key for Haskins is to find someone who can back him and land him a second chance in the NFL.

Right now, the market is strong for Haskins, probably due to the fact that he’ll cost very little. The question is whether he’ll be worth the headache. Even with the chance to save money by releasing him later on, Washington evidently was over Haskins’ antics and ate some extra dead cap to cut him loose.

Tankathon projects Carolina to have the ninth overall pick in the 2021 NFL Draft. That’s close enough to the top to pull off a big trade if the Panthers want their franchise quarterback of the future.

The new general manager replacing the fired Marty Hurney may want to begin his tenure with a bang and take a new QB. Making an unpopular move like signing Haskins would be perplexing to say the least, particularly if he’s just going to sit on the bench while a new, promising rookie or Bridgewater starts in 2021.

Considering there are top-tier playmakers on Carolina’s offense in receivers Robby Anderson and DJ Moore, along with superstar running back Christian McCaffrey, there’s urgency to add a more dynamic quarterback to the roster. The Panthers drafted all defense in 2020, so it’d make sense to be aggressive in landing a new face of the franchise this time around.

In any scenario, Haskins seems like a peculiar fit, especially for an organization trying to put its best foot forward amid a new era with owner David Tepper and head coach Matt Rhule.

In the event Carolina somehow gets Haskins to live up to his potential and become a higher-end starter in the NFL, though, it’d be among the most fascinating career turnarounds in recent memory and a testament to how well-run the Panthers’ new regime is.