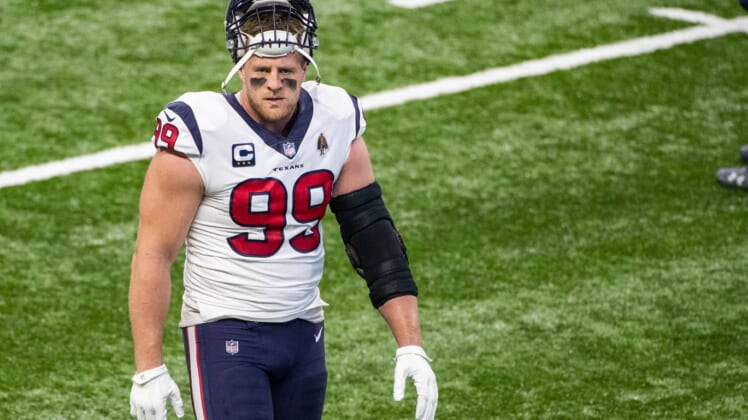 It was noted following his release last week that J.J. Watt was receiving a ton of interest. That now includes Buffalo Bills rumors suggesting that the defending AFC East champions are interested in signing the three-time NFL Defensive Player of the Year. According to ESPN’s Kimberley Martin, the interest is mutual.

“Count the Bills as one of several teams looking to add JJ Watt. I’m told the Bills have inquired about Watt — and the interest is definitely mutual,” Martin reported on Wednesday.

Buffalo Bills in on J.J. Watt

For Watt, this would make a whole lot of sense. He’s looking to latch on with a contender after seeing his former Houston Texans squad struggle big time a season ago. The 31-year-old future Hall of Famer is in the back end of his career. More than money, he wants to win that elusive Super Bowl title.

Buffalo is coming off an extremely impressive 13-win season that culminated in an AFC Championship Game loss to the Kansas City Chiefs. Josh Allen is one of the best quarterbacks in the NFL.

With that said, Bills rumors this offseason will link the team to numerous defenders in free agency. They finished 16th in scoring defense this past season after ranking No. 2 overall in that category back in 2019. Defensive-minded head coach Sean McDermott is going to want to add talent to all three tiers of that unit during the NFL offseason.

That will likely start out on the edge. Mario Addison and A.J. Klein led the Bills with a mere five sacks in 2020. Buffalo’s top-three edge rushers recorded a combined 11.5 sacks. That’s just not going to cut it.

Buffalo Bills rumors: How would J.J. Watt fit on defense?

Pretty darn well. That’s the short of it. Defensive end Trent Murphy is slated to become a free agent after recording a mere two sacks in 2020. Buffalo finds itself just $1.3 million under the projected 2021 NFL salary cap.

It would save nearly $14 million against the cap by releasing Jerry Hughes and Mario Addison. That would obviously be more than enough to bring Watt in.

A future first ballot Hall of Famer, Watt recorded 17 quarterback hits and five sacks a season ago. However, it must be noted that he was double teamed in terms of blocking assignments at the second-highest clip in the NFL.

Back in 2018, the Wisconsin product tallied 25 quarterback hits, 16 sacks and a league-high seven forced fumbles. Any team looking to add him would be looking for somewhat similar production.

In addition to the Bills, Watt has interest in joining the Cleveland Browns. He’s also talked to the Tennessee Titans and Green Bay Packers. By being released so early in the offseason, Watt has the market to himself before NFL free agency opens next month. That should lead to a relatively quick resolution and a new team.