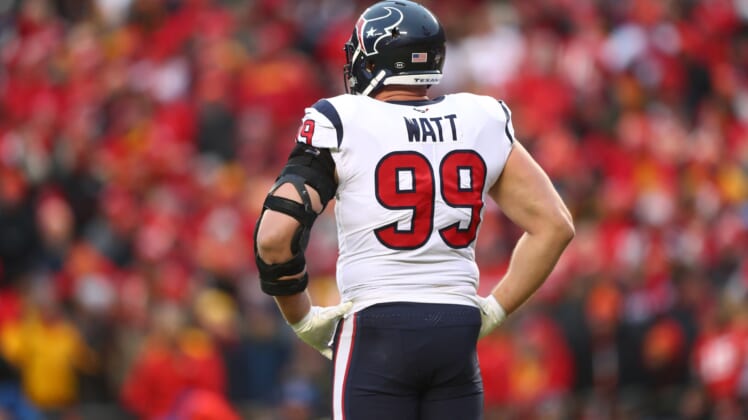 J.J. Watt has only been a free agent for a few hours and the three-time NFL Defensive Player of the Year is already generating interest from across the league. Following his stunning release from the Houston Texans, the 31-year-old defensive lineman immediately becomes one of the top free agents available this offseason.

Watt and the Texans agreed to part ways, with the franchise icon allowed to choose his next destination rather than being traded. While NFL free agency doesn’t kick off for another month, NFL rules allow Watt to sign immediately with another club. Despite the 2021 NFL salary cap putting a majority of teams in a tight spot financially this offseason, many of those same clubs are already after J.J. Watt.

According to ESPN’s Ed Werder, approximately a dozen teams have expressed interest in Watt following his release. The Pittsburgh Steelers, Cleveland Browns, Buffalo Bills and Tennessee Titans are among the growing list of franchises interested in adding the future Hall of Famer to their defense for the 2021 season.

While he is no longer the same player who was a unanimous selection to the NFL 2010s All-Decade Team and earned five first-team All-Pro selections, Watt can still make a huge impact. He received an 85.5 grade from Pro Football Focus this season, rating as one of the best edge rushers in football. He finished the year with five sacks and racked up 29 quarterback hurries and 11 hits in 16 games.

Any team would be happy to add him, but critical factors will likely determine where he plays in 2021. Watt wants to compete for a Super Bowl and he’ll recognize the spots that give him the best opportunity to do that. Of course, he will also be considering the defense he fits best with and which team culture meshes with him.

A Wisconsin native, the Green Bay Packers are receiving plenty of attention as a potential landing spot. They need help along the defensive line and can offer the surrounding talent to convince Watt that this team can reach a Super Bowl. Unsurprisingly, teaming up with his brother T.J. and Derek Watt on the Steelers is another strong possibility.

Another potential factor that could be in play is location. Kealia Watt, J.J Watt’s wife, is a professional soccer player for the Chicago Red Stars. Staying in the Midwest would allow them to be closer next season.

The Browns would be another ideal landing spot. He could partner with Myles Garrett, creating an excellent pass rush to complement one of the NFL’s best offenses. As we also saw this past season, head coach Kevin Stefanski has built a winning culture in Cleveland and the entire locker room seemed to buy in last year.

Teams like the Steelers and Packers are currently over the projected salary cap, which makes signing a free agent more challenging. Given there is uncertainty around the specific cap ceiling next season, with an official number not expected until March, this could play out for another month.

Either way, J.J. Watt will find himself in a much better situation next season. Meanwhile, Deshaun Watson is stuck with the Texans.