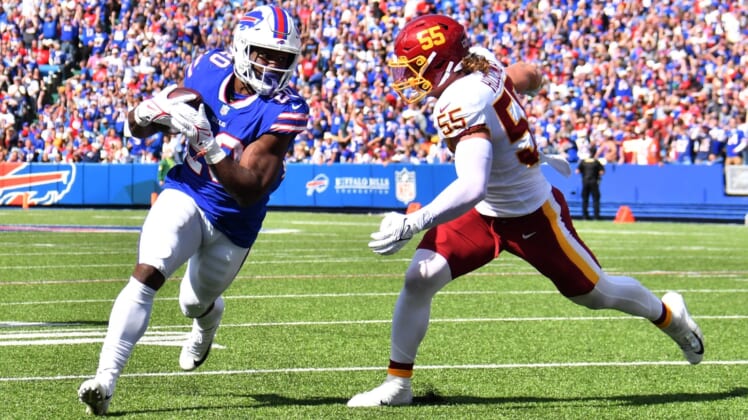 Josh Allen passed for 358 yards and four touchdowns and also rushed for a score to help the Buffalo Bills notch a easy 43-21 victory over the Washington Football Team on Sunday at Orchard Park, N.Y.

Emmanuel Sanders caught two touchdown passes and Dawson Knox and Zack Moss hauled in a score apiece for Buffalo (2-1). The Bills have outscored opponents 78-21 in back-to-back victories since losing at home to the Steelers in Week 1.

Taylor Heinicke completed 14 of 24 passes for 212 yards, two touchdowns and two interceptions and also rushed for a score for Washington (1-2). Antonio Gibson turned a short pass into a score and Logan Thomas caught a touchdown pass.

The Bills led by 13 at halftime and navigated 93 yards on 17 plays over eight minutes and 17 seconds to open the third quarter with Allen capping the drive with a 5-yard touchdown pass to Sanders with 4:43 left for a 33-14 lead.

Hyde intercepted Heinicke on Washington’s next drive, leading to Bass’ 29-yard with 2:11 left in the quarter.

Allen passed for 263 yards and three touchdowns as Buffalo held a 27-14 halftime lead.

Allen threw a 28-yard scoring pass to Sanders on the first possession. He later tossed a 7-yard touchdown pass to Zack Moss to make it 14-0 with 12:59 left in the half.

Poyer’s interception of Heinicke and 28-yard return put the ball at the Washington 17. Three plays later, Knox made an acrobatic 14-yard grab in the end zone to make it 21-0 with 10:42 remaining.

Washington got moving when Gibson caught a short pass from Heinicke and meandered 73 yards for a score with 9:51 left.

Dustin Hopkins’ ensuing kickoff was short and high and bounced back up field before Hopkins himself recovered at the Bills’ 24. Five plays later, Heinicke scrambled in from the 4 to pull WFT within 21-14 with 7:39 left.

Bass tacked on field goals of 21 and 48 yards to account for the 13-point lead at the break.