As if tensions within the Cleveland Browns‘ organization weren’t already high. In addition to head coach Kevin Stefanski testing positive for COVID-19, now starting quarterback Baker Mayfield is in the same boat.

Mayfield, who is vaccinated, will need two negative COVID tests before Saturday’s AFC matchup with the 6-7 Las Vegas Raiders who also have their backs up against the wall. For now, it appears likely that the Browns will have to take the field without their preferred starting quarterback under center.

If Mayfield doesn’t clear protocols by Saturday, veteran journeyman backup Case Keenum will make his second start of the 2021-22 season. The Browns won the first game Keenum started, a 17-14 victory over the Denver Broncos back in Week 7. Keenum completed 21-of-33 passes for 199 passing yards and a passing touchdown. He has made a total of six appearances for the Browns already this season. 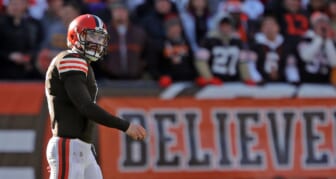 Coming off the momentum of their first playoff win since 1994, where Stefanski won Coach of the Year honors, the Browns entered this season with a stacked roster, giving them confidence for a Super Bowl run. Now they find themselves at 7-6, tied for second place within the AFC North, chasing the 8-5 Baltimore Ravens for the division crown.

They’ve battled chemistry issues from Odell Beckham’s father posting a video criticizing Mayfield, to injuries to their offensive line and running backs, and now COVID is taking its toll throughout Cleveland. Honestly, it’s kind of amazing they are even at 7-6, still in the fight for a playoff spot midway through December.

Stay tuned for any more updates regarding Baker Mayfield’s status, or any other Cleveland Browns news prior to Saturday’s Raiders matchup.