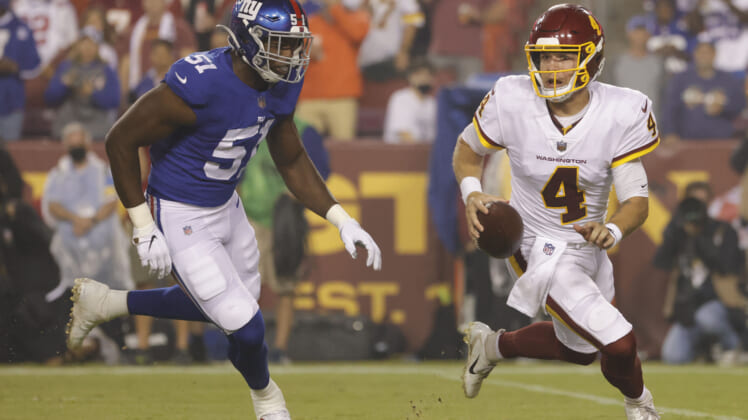 There was a welcomed addition to the New York Giants defense on Sunday as Azeez Ojulari was on the practice field for the first time this summer not wearing a red jersey.

The second-year linebacker had been put on the non-football injury list with a hamstring injury for the entirety of training camp. But after he passed his physical, he was activated off the injury list.

Head coach Brian Daboll has been reluctant to publicly share specific details when discussing injuries to his players and when they might return. So there were concerns as to when Ojulari would be available. But now those concerns are erased as Big Blue has their best pass rusher from a season ago back on the field.

Last season, the star pass rusher set the all-time franchise rookie record for sacks in a season with eight (Lawrence Taylor unofficially had nine and a half sacks in 1981, and sacks didn’t become an official stat until 1982).

During the offseason, the 6-foot-2 Ojulari bulked up and added muscle to his physique and said he currently weighs 254 or 255 pounds, compared to the last season when his weight fluctuated between 245 and 249 pounds. The hope is that his refined body can help him be a more consistent player as he enters his second season as a pro, but having another top pass rusher on the other side could be just as beneficial.

With Ojulari back and healthy to go along with rookie fifth overall pick Kayvon Thibodeaux, there are reasons to be optimistic that New York will have a fearsome pass rush once again. Thibodeaux was widely viewed as one of the best edge rushers in the 2022 Draft class and should be able to make an immediate impact at the pro level too.

Ojulari was asked if having a top-tier pass rusher on the opposite side of him could help his production.

No one would be surprised if Ojulari and Thibodeaux both finished the season with double-digit sacks in their first season working together. After Ojulari tallied eight a season ago, aiming to improve by two QB takedowns thanks to the presence of Thibodeaux shouldn’t be too much of a stretch. Meanwhile, if Thibodeaux can reach the same numbers, the Giants could have a potent tandem on their hands for the foreseeable future.

New York’s defense has gotten the better of the offense throughout the practice sessions in training camp so far this summer. Expect that trend to continue now that Ojulari is back on the field.