Antonio Brown became one of the best wide receivers in the NFL thanks to his ability to diagnose defenses and react to what’s in front of him. It seems that same skill doesn’t translate to his ability to recognize fake celebrities.

Hanging out in South Florida, a go-to spot for the NFL star, Brown thought he recognized pop artist Pitbull on the street. Never missing an opportunity to strike up a conversation with a fellow celebrity, Brown approached the man and poured out his appreciation for Pitbull’s music.

While the real Pitbull would certainly have appreciated receiving props from a fellow celebrity, Brown fell into a prank. Known on YouTube as ‘Lefty‘, the man went out to South Beach to trick people into thinking he is the 41-year-old singer.

It seems Antonio Brown never found it strange that ‘Pitbull’ immediately wanted to take a picture with him. While the two men were only together for a brief moment, it’s fair to say Brown walked away believing he met the real Pitbull.

Will Antonio Brown play next year?

Fortunately for Brown, this won’t be one of the off-field incidents that give NFL teams pause about signing him. Instead, the 33-year-old receiver will have to hope his wild on-field exit and the public shots taken at Tom Brady and the Tampa Bay Buccaneers won’t scare other teams away.

Brown still proved in 2021 that he can play at a high level when healthy. He hauled in 42 receptions for 545 receiving yards in just seven games last year before an ankle injury sidelined him.

He’s already expressed interest in playing in the 2022 NFL season, specifically targeting the Cleveland Browns and Baltimore Ravens. While he might cause headaches for an organization and his stints with the Buccaneers, Las Vegas Raiders and Pittsburgh Steelers all ended with him quitting on the team, talent is what matters most.

Don’t be surprised if Brown is on an NFL roster this season, likely playing for a team with a star quarterback who has influence over the roster. 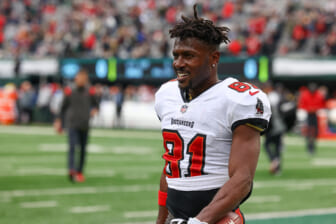