The Chicago Cubs are sellers at the MLB trade deadline and Anthony Rizzo is one of the hottest candidates on the market. Just a few years removed from playing a crucial role in a historic World Series title, the All-Star free agent could be moved before July 30.

Compared to his All-Star seasons, Rizzo is in the midst of a down year at the plate. After posting a .901 OPS from 2014-’19, Chicago’s left-handed first baseman isn’t performing at his usual standard. But for many playoff contenders, he would still be an upgrade.

Rizzo is an intimidating hitter from the left side and a vacuum at the corner infield position. A difference-maker in the middle of the order and patrolling the infield, let’s examine the 3 best fits for Rizzo.

The Boston Red Sox are certainly buyers approaching the trade deadline. As stacked as their offensive attack is, they could still use an upgrade at first base and Rizzo fits perfectly.

Boston’s elite offense would become further weaponized by Rizzo’s theoretical arrival. He gives manager Alex Cora another lethal hitter. Rizzo being such a threat from the left side helps balance out their offense a bit more. There’s also the component of him scooping throws from Rafael Devers and Xander Bogaerts on the left side of the infield.

Bobby Dalbec has struggled to get on base while versatile infielder Michael Chavis has been unable to sustain success at the plate in the big leagues. Rizzo is a better option at the plate and in the field for the Red Sox.

What could ultimately prevent the Red Sox from acquiring Rizzo is their desire to trust the lineup that got them to this point and to avoid dipping into a thin farm system. They will also likely be on the hunt for pitching upgrades, as they’ve gotten by with a suspect starting rotation this season.

The Seattle Mariners are in the thick of the AL playoff race and have the ammunition to make both short- and long-term moves. Rizzo would be a short-term enhancement and could even re-sign with the club.

Seattle’s starting rotation is really carrying the team this season. The offense is the Achilles heel, ranking in the bottom-third of the sport in runs (402), hits (692), batting average (.218) and OPS (.674). Rizzo adds a proven commodity who pitching staffs have to respect.

The silver lining for the Mariners’ offense has been their ability to hit the long ball, primarily Mitch Haniger and Kyle Seager. Rizzo strengthens their strength in that regard thanks to his superb power to all fields.

While Ty France has played well at first, his versatility creates flexibility in the infield and Rizzo’s experience helps a young group of talent (Dylan Moore and J.P. Crawford). While the Mariners probably aren’t beating AL powerhouses like the Chicago White Sox and Houston Astros in a playoff series. At the same time, Rizzo helps this team get more meaningful games under their belt.

What stops the Mariners from making this move? They may feel that they’ve exceeded expectations this season and would prefer to pursue the first baseman in free agency, as opposed to surrendering value for a few months of play.

An intradivision trade between the Cubs and Brewers would be quite stunning. When it comes to his would-be fit on the Brew Crew, though, Rizzo makes this team a World Series contender.

Manager Craig Counsell has an elite starting rotation and a reliable bullpen. Leading the NL Central is great, but the Brewers could be even better if it wasn’t for their underperforming offense. Milwaukee’s offense is in the bottom third of MLB in hits (719), batting average (.224) and OPS (.696) this season. 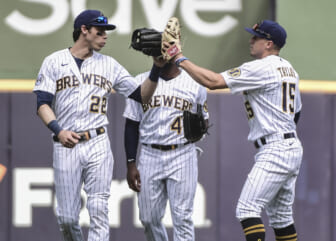 Also Read:
3 reasons why the Milwaukee Brewers are a legitimate National League contender

Kolten Wong, Omar Narvaez and midseason pickup Willy Adames have been steady forces, but the likes of Christian Yelich, Keston Hiura, Avisail Garcia and Jackie Bradley Jr. are inconsistent at the plate. All the while, the Brewers have received minuscule production from their first basemen. While they recently acquired Rowdy Tellez, that doesn’t mean they couldn’t use another bat.

Rizzo starts at first, serving as the Brewers’ official answer at first. Hitting around an offense with players capable of better performances, Rizzo can drive in runs at a high level, play alongside a defensive-savvy infield and join a team with playoff experience like himself.

The Brewers can win the World Series and should be looking to shore up loose ends. Rizzo poses a way to knit one of the few remaining question marks on their roster. It would become a matter of whether their offense as a whole can pick up the slack.