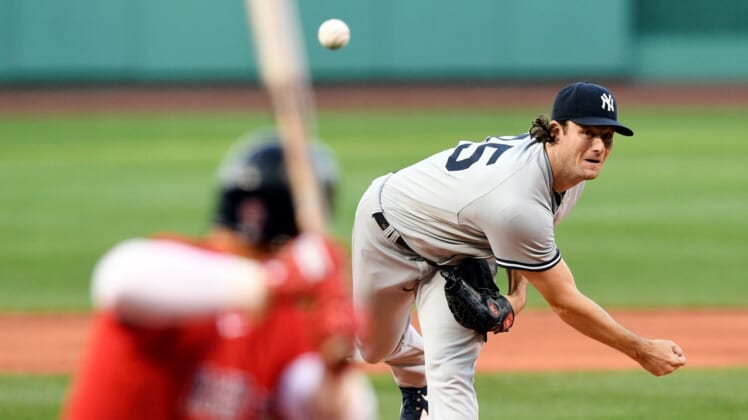 Rafael Devers hit a pair of home runs, including a tiebreaking two-run blast in the fifth inning of the Boston Red Sox’s 6-2 victory over the visiting New York Yankees in the second of a four-game series on Friday night.

Devers (2 for 4) added a three-run shot in the seventh for his 100th career home run and his team-leading 26th of the season to cap his five-RBI night. Xander Bogaerts also drove in a run for Boston, which earned its fourth straight win.

The Red Sox took the first two games of the series after a wild come-from-behind 5-4 win in 10 innings on Thursday. Boston improved to 9-2 against New York this season.

Red Sox starter Eduardo Rodriguez exited the game before recording an out in the second inning after suffering from migraine symptoms. The left-hander allowed a run on two hits with a walk and a strikeout in one inning.

Phillips Valdez pitched the next three innings and struck out a career-high seven in relief of Rodriguez. Yacksel Rios (3-0) tossed a pair of scoreless innings to earn the win for Boston.

Yankees starter Gerrit Cole (10-5) gave up three runs on six hits with a pair of walks and eight strikeouts over five innings.

Brett Gardner and Rougned Odor each had an RBI double for New York, which has dropped two straight following a four-game winning streak.

Gary Sanchez walked to lead off the second and Gleyber Torres singled to put runners on first and second before Gardner doubled off Rodriguez to make it 1-0.

After the play, Rodriguez motioned for the Red Sox’s trainer in the dugout and went down to his knees before eventually walking off under his own power.

Bogaerts tied it at 1-1 on a sacrifice fly in the fifth before Devers’ go-ahead homer.