Winners and losers from Alabama vs. Ole Miss SEC showdown 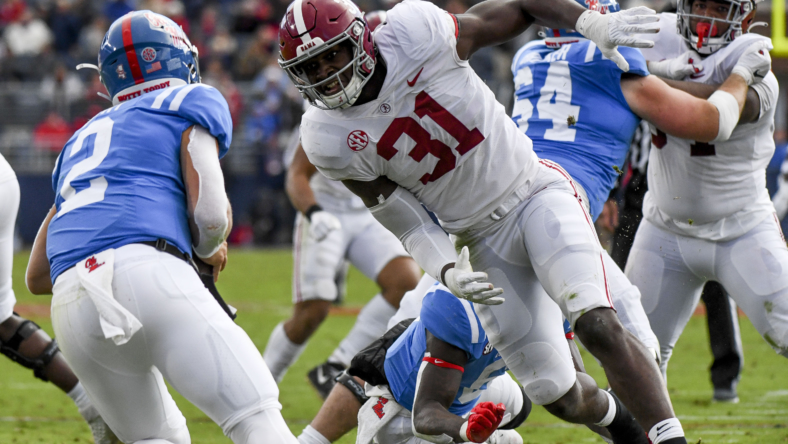 The Alabama Crimson Tide‘s rivalry with the Ole Miss Rebels continued on Saturday, with the 70th meeting between these two SEC mainstays. A series that dates all the way back to 1894, there is plenty of history tying these two historic programs to one another.

While ‘Bama came into the matchup having won six in a row against Ole Miss, both teams started the day ranked highly, with the Crimson Tide in ninth place of the AP college football rankings and the Rebels ranking 11th.

The Crimson Tide were favored by -10.5 points, but once play got underway, spectators quickly realized that Ole Miss wasn’t ready to hand their rivals an easy win. Yet, even with Alabama making several blunders, it wouldn’t be long before coach Nick Saban had his team back on the right path.

Down below, we dive into the biggest winners and losers from the Alabama vs. Ole Miss showdown.

Ole Miss was caught celebrating early when the Rebels were up by a touchdown with seven minutes to go in the third quarter. This was all the motivation Bryce Young and Alabama needed to take over.

And take over, they did. Alabama would score 10 unanswered points to go ahead for good, thanks to finally finding some success with their ground game while limiting their blunders.

While the Crimson Tide may have won the game in the end, the win could have been much more convincing. Alabama started by shooting themselves in the foot, over and over again, giving way to Ole Miss building early momentum.

This 4th-and-1 miscue was a classic example. The Crimson Tide were likely just lining up without the intention of actually snapping the ball as the game clock wound down at the end of the first quarter. Apparently, center Seth McLaughlin didn’t get the memo.

Instead of trying to see if Ole Miss would be the team who makes a mistake by going offsides on fourth down, it was Alabama who, once again, made a mental error.

Here’s another, where edge rusher Dallas Turner made an incredible play to blitz past his matchup to immediately penetrate the backfield for an easy sack. But even that couldn’t be done correctly. He nearly takes Ole Miss QB Jaxson Dart’s head off, negating the big play with a big penalty instead.

This botched play gave Ole Miss a shimmer of hope, where they were able to extend the drive and get the go-ahead score five plays later.

These mistakes have plagued Alabama all season. They came into the matchup tied for averaging the most penalties per game in college football, at 8.67 per game. Still, having one of the most talented rosters in the nation, and of course, Heisman winner Bryce Young, helps bail them out time and time again.

Lane Kiffin knew his Rebels would need a big day from the team’s playmakers to compete with Alabama. Freshman running back Quinshon Judkins came through in a big way, establishing the Ole Miss rushing attack early on. Already having over 1,000 rushing yards on the season before the game even kicked off, Judkins added to his total with 135 yards and two touchdowns.

Yet, it was what he did in the scoring column that will place Judkins in the Ole Miss collegiate record books for years to come. With his one-yard score in the first quarter, Judkins joined several Rebels legends of the past, including Archie Manning and Deuce McCallister, on the school’s all-time record books.

Later in the second quarter, Judkins was able to find the end zone again, giving him 15 rushing touchdowns this season. The Alabama native now has the most rushing touchdowns in Ole Miss single-season school history. With two more regular season games to go, Judkins appears to have a strong chance of putting the all-time record at Ole Miss out of reach. Not bad for a freshman.

Alabama entered the game averaging 202.8 rushing yards per game, good for 18th-best in the nation. But they’ve averaged just 93.3 yards over their past three contests. Coach Nick Saban had to be concerned with his team’s recent effort and likely placed a great emphasis on improving their ground game throughout this week’s practices.

Unfortunately, Ole Miss just prepared better. At least to begin the game. The Rebels managed to hold the Crimson Tide to just four rushing yards in the first quarter and a total of 26 rushing yards on 16 carries in the first half. From Jase McClellan to Jahmyr Gibbs to Bryce Young, each was given a few opportunities, but none had a bigger gain than 14 yards.

It even led to Gibbs not seeing another snap in the second half, but maybe this was the key to their turnaround. The Crimson Tide then had 82 second-half rushing yards, largely fueled by McClellan who finished with 84 yards on the day.

While in the first half, we saw the Rebels waiting in the backfield on seemingly every snap, recording multiple tackles for loss throughout the day. No matter what the Crimson Tide tried, it didn’t work. But the second half proved to be a different story.

Still, offensive coordinator Bill O’Brien might want to head back to the drawing board to find a better way to take advantage of his skilled backfield to begin the game instead of hoping for success later on.

Poor Jaxson Dart. The sophomore Ole Miss QB never had a chance. The Rebels may have established an early 10-point lead, but once the Crimson Tide rallied ahead, it only gave their front seven a chance to pin their ears back.

Alabama has an elite tandem of edge rushers, with Will Anderson Jr. as a likely top-five pick and Dallas Turner as another sack artist who will likely be playing on Sundays before long. Both made an impact, but it was actually defensive tackle Byron Young who had two sacks and led the team with 11 tackles in a dominant effort.

But it wasn’t just Alabama’s defense that wreaked havoc. Ole Miss got the party started, holding back the Crimson Tide rushing attack early on, finishing with a team total of four tackles for loss and three sacks. It just wasn’t enough.

In comparison, Alabama generated seven tackles for loss and three sacks. Both defenses caused headaches for the opposing QB, but in the end, the Crimson Tide’s deep talent pool proved too tough to top.