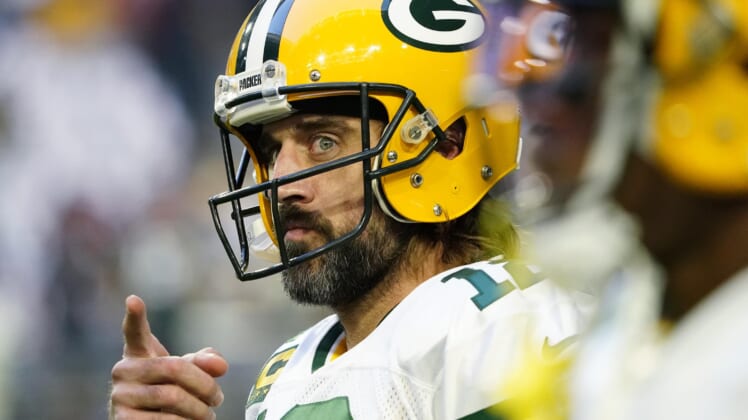 The NFL didn’t lay the hammer down on either Aaron Rodgers or his Green Bay Packers upon the conclusion of an investigation into the team’s COVID-19 situation.

According to multiple media reports, the league has fined Green Bay a mere $300,000 for violating its COVID-19 protocols. In said reports, it’s also being noted that Rodgers as and teammate Allen Lazard were each fined just $14,650 for violating the protocols.

These fines stem from the two teammates attending a Halloween party mask-less last month, in violation of NFL protocols for unvaccinated individuals.

The NFL had in the past indicated it reserved the right to dock draft picks from teams and suspend players for continued violations of its protocols.

More than anything, Aaron Rodgers has been in the news for indicating during the preseason that he was immunized from the virus. Prior to last week’s game against the Kansas City Chiefs, news surfaced that the reigning MVP wasn’t vaccinated — leading to questions about whether he continued to violate NFL COVID-19 protocols.

Rodgers, who remains on the COVID-19 list, did not take part in last week’s loss to the Chiefs. He also made waves during a media appearance in which the quarterback voiced concern over the aforementioned protocols and their relationship science.

It has been noted in the past that Rodgers wouldn’t face a suspension. Even then, the league indicated that suspensions could be in the cards for repeat violations of the protocols when they were announced during the summer.

As for Rodgers’ status moving forward, there’s a chance that he’ll be cleared to play ahead of Green Bay’s Week 10 outing against the Seattle Seahawks. He will have to continue to be asymptomatic while being cleared by an outside medical professional. When Rodgers tested positive for the virus he was showing symptoms.