Rumors are coming hot and heavy out of Cleveland that the Cavaliers will look to trade five-time All-Star big man Kevin Love. It’s not going to be an easy sell for the Cavaliers with Love set to earn north of $60 million over the final two years of his current contract.

Reports now indicate that other teams view Love’s trade value in a negative manner. This means Cleveland will likely have to off load a young player and draft pick in order to rid itself of his albatross of a contract.

With that said, a number of contending teams would like to have someone of Kevin Love’s ilk come off the bench. He can still hit the three-point shot and is a mismatch when it comes to playing the stretch four or stretch five positions. Below, we look at four ideal trade scenarios surrounding the veteran big man.

San Antonio has been missing that big man who can shoot from the outside ever since LaMarcus Aldridge started to regress prior to his retirement. It’s something Gregg Popovich values in his system dating back to the Tim Duncan days. Could the Spurs potentially look to retool on the fly with the excess of cap room they boast rather than rebuild altogether? That’s a big question given Pop’s advanced age of 72.

Perhaps, San Antonio looks to add Love to the mix by taking his contract off the hands of the Cavaliers. In return, the team adds a 20-point per game scorer in Collin Sexton to team up with Dejounte Murray in the backcourt. As for Cleveland, it picks up a starter-caliber wing in White and depth at center with Poeltl. The cost? A future first-round pick and a player in Sexton who is firmly on the trade block.

Despite what embattled Blazers general manager Neil Olshey might want us to believe following the firing of head coach Terry Stotts, there’s going to be some dramatic changes in the Pacific Northwest this summer. Portland is coming off its fourth first-round exit in the NBA Playoffs in five years. Speculation continues to run roughshod that the loyal Damian Lilllard might now be looking to get out of dodge. At the very least, Lillard needs a better supporting cast than what we’ve seen recently.

That’s where Portland-area native Kevin Love could come into play. His ability to hit the three-point shot would work extremely well with the Blazers regardless of who their next head coach is. Adding Nance Jr. to the mix would help stabilize one of the worst defenses in the NBA. Meanwhile, Portland nabs a lightly protected 2022 first-round pick for its troubles. 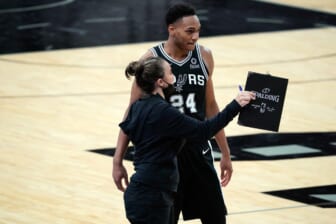 As for the Cavaliers, this would be the best of both worlds. They’d be able to retain their high first-round pick in 2021 while adding three players in Covington, Nurkic and Jones Jr. who have trade value. That would help mitigate the loss of next year’s first-round pick. It almost makes too much sense.

It’s no secret that the Celtics are going to look to trade both Kemba Walker and Marcus Smart this offseason. Unfortunately, opposing teams seemingly believe that the two have negative trade values — meaning that Boston might have to bring back a bad contract in return. That’s where Love comes into play. He’s also a fit with Boston needing more scoring from its bigs. Add in the inclusion of Nance Jr. and Sexton in this trade, and new Celtics president Brad Stevens would be hitting a home run in his initial blockbuster deal.

As for Cleveland, it takes a chance that Walker’s knee injuries are a thing of the past. He’d work extremely well with Darius Garland in the backcourt. Williams goes to the Cavaliers to team up with fellow young big man Jarrett Allen. Meanwhile, the Cavaliers also pick up a top-16 selection in the 2021 NBA Draft. It’s a win-win.

It’s clear that Los Angeles needs to find more scoring behind LeBron James and Anthony Davis. With the two struggling through injury-plagued 2020-21 campaign, the defending champs were jettisoned from the playoffs in the first round. Unfortunately for general manager Rob Pelinka and Co., the team doesn’t have a ton of assets to add a third star.

That’s where this hypothetical Kevin Love trade comes into play. He’d work well as a stretch five next to AD in the frontcourt. Sexton would also act as an upgrade at point guard over impending free agent Dennis Schroder, who struggled big time in the playoffs.

In return, the Cavs add a potential franchise cornerstone in power forward Kyle Kuzma. He’d team up with Isaac Okoro and Jarrett Allen to form a young and talented frontcourt. It also doesn’t hurt that Cleveland picks up a first-round selection while being able to unload Love’s bloated contract.