There is no doubt the Chicago Bears and quarterback Justin Fields could use some help in the passing game in 2022. Second-year wide receiver Darnell Mooney did an admirable job in being the team’s top receiver and racking up over 1,000 yards last season, but he does not project to be a legit WR1 in the NFL for years to come.

Outside of Mooney there was a major production dropoff for the Bears receivers. Tight end Cole Kernet tallied the second most yards with 612 in 2021, and exiting free agent WR Allen Robinson was third on the team despite playing in only 12 games. After Mooney, the next four players on the team’s receiving stats list barely had over 1,600 yards combined.

It is a serious enough problem that Bears General Manager Ryan Poles recently admitted they have a glaring weakness at the position. However, despite not having a first round pick in this month’s draft, he won’t waste a top pick on a WR reach.

Related: Who are the top players left on the NFL free agent market?

“It’s funny, because there’s a lot of panic, like, ‘You need receivers,’” Poles told ESPN. “I think Davante [Adams] was taken in the second, right? So there’s talent there. It’s not always going to be like that, I get it. And we’re going to be patient. If it’s not there, we’re not going to do it and force it, either.”

Assuming the Bears do feel there is a worthwhile choice with their two second round picks at 39 and 48 overall, or in the third round at 71, here are four players that could still be on the board and offer an ideal fit for the Chicago Bears at wide receiver.

Jahan Dotson is on the smaller side at 5-foot-11 and 184-pounds, but he packs a major punch when it comes to big play potential. Unlike many of his contemporaies, Dotson played all four years at Penn State and improved each season. It all culminated in an outstanding senior year where he racked up nearly 1,200 yards receiving, snagged 91 catches and did 12 touchdown dances. 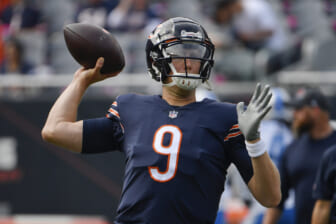 Obviously, due to his size there are concerns on how he can hold up to the brutality of the NFL, but in today’s league big-play potential is at a premium, and the Bears need that gift in a major way. Early in the second round, Dotson deserves a serious look.

George Pickens is the flipside to a player like Dotson. He doesn’t have anywhere near the tape to look at after only playing one full season in 2020, and then missing most of 2021 with a torn ACL. However, unlike Dotson he has the sort of size that pro scouts are looking for at 6-foot-3, 200-pounds. As well as the proven physicality and route running gifts needed at the next level.

The potential is their for Pickens after being one of the highest touted high-schoolprospects from the 2019 senior class. However, with such limited playing time, there is some mystery surrounding the true upside he will have at the next level. Meaning he could be a great option if he is still available when the team makes their third round selection at No. 71.

Alabama WR John Metchie III only became a starter in 2021, but he made a heck of a statement as one part of the team’s dynamic pass catching duo with Jameson Williams. While his teammate will be drafted before him, you can’t overlook the impressive numbers Metchie III put up last season — 96 catches, 1,142 yards and eight touchdowns. 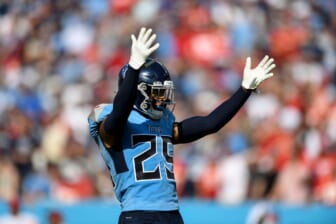 Metchie III has a decent frame at 6-foot and 195-pounds, however, he has shown strength beyond his size, explosiveness, and solid hands. As a first round pick he would be a reach, but with the Chicago Bears follow up pick in the second round (48), he would be a very sound selection.

What Calvin Austin III lacks in size as a very slight 5-foot-9 and 162 pounds, he makes up for in burner speed with a 4.32 40-yard dash at this year’s combines — which was fifth fastest overall, and third among wide receivers. In 2021, he had his best season yet as a full time starter. Pulling in 74 catches, gaining 1,149 yards and an imppressive eight touchdowns for Memphis.

Austin III’s size will be a big hindrance for him at the NFL level, especially when it comes to blocking. But as a third round selection with the goal of being a premier slot receiver who can blow a game wide open with his speed, he would be a smart play and fill a void the offense has.