An alliance between the Seattle Seahawks and Cleveland Browns quarterback Baker Mayfield has only become a possibility in the last day, but it is a union that makes all the sense in the world.

On Tuesday, The Athletic’s NFL insider Jeff Howe reported that the Carolina Panthers had “preliminary talks” with the Browns about swinging a trade for disgruntled and expendable QB Mayfield. However, not long after that report came the news that the 26-year-old was not interested in joining the Panthers organization.

What was overlooked in the Mayfield and Carolina talks story was the added detail that the Seahawks were also kicking the tires on the idea of trading for the 2017 Heisman Trophy winner. With Mayfield’s alleged new home first choice in the Indianapolis Colts now out of the equation, after acquiring Matt Ryan, Mayfield to Seattle seems like a very sensible option. Here are three reasons why.

Seattle Seahawks have cash and assets for a trade

As teams have eaten into their salary with big-ticket free agent pick-ups or traded away draft picks to acquire talent from other teams, Seattle still holds a good bit of assets to make a Mayfield trade feasible. The team currently has over $21 million left in cap space. This means they won’t need to massage their salary cap much to take on Mayfield’s $18.9 million cap hit this season.

They also have some excess when it comes to draft capital. After trading franchise QB Russell Wilson last month, the team received a first, second, and fifth-round selection in next month’s draft. While the Browns reportedly have been asking for a first-round choice in a return for Mayfield, the team does not have much leverage with the entire league knowing they need to get their former starter off the roster as soon as possible. 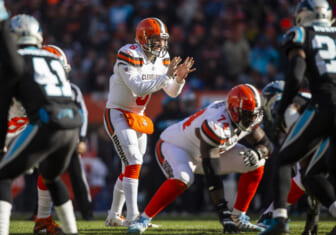 Meaning the Seahawks could send their two second-round picks, the extra fifth-round selection, and a few players to offer the Browns a strong return without giving up any first-round picks in an upcoming draft.

Pete Carroll may be the perfect coach for Baker Mayfield

Mayfield became a superstar in college football because of his unabashed fire and passion for the game. It made him a legend at Oklahoma University and one of the most popular players in the amateur side of the sport. However, it hasn’t been received quite as well at the pro level where, self-control and greater maturity are a bigger necessity.

However, Seahawks head ball coach Pete Carroll is similar, for better or worse, in being a man willing to outwardly show his love for the game. If there is anyone that can understand Mayfield’s vigor for football it would be Carroll. He would be the first NFL headman to connect with Mayfield in a way few have so far and pull the best version out of him.

Related: Who are the top NFL free agents left on the open market?

Not to mention Mayfield and former QB Wilson have similarities in their style of play, so Carroll is well suited to mold an offense around the strengths of the Texas native while hiding his weaknesses.

The Seahawks are in the midst of a franchise rebuild and transition. The Russell Wilson era is over and they need to find the next QB to lead them into the upcoming decade. The 2022 NFL draft class for QBs is not as strong as years past, so any rookie signal-caller they take will need some time to develop. However, with Mayfield not even yet in his prime, he still has the upside to become a franchise QB in the league.

Furthermore, Mayfield is in the last year of his rookie contract and needs to put himself in a situation where he can show the level of improvement teams will want if they decide to offer him a big-time contract next offseason. Playing under Carroll feels like the best choice of the available options left. In a way, the Seahawks need Mayfield and Mayfield needs the Seahawks. If it doesn’t work out they can both go their separate ways after this season.

Related: Baker Mayfield trade – What are the best landing spots for the Browns QB

However, if it does he could very well end up being what the addition of Drew Brees meant to Sean Payton and the New Orleans Saints over a decade ago.