The New England Patriots added a fourth signal caller to their quarterback room earlier in the week, re-signing veteran Brian Hoyer to a one-year contract.

Hoyer, 35, will presumably come in to compete with Jarrett Stidham for the third spot behind former NFL MVP Cam Newton and rookie first-round pick Mac Jones. Those two are expected to be part of a training camp competition for the starting job.

The decision to bring back Hoyer now raises some questions regarding Stidham’s future with the New England Patriots. That’s where we will start in looking at three moves the Patriots should still make this offseason after re-signing Hoyer.

A fourth-round pick out of Auburn back in 2019, Stidham entered last offseason as a favorite of the Patriots’ brass. In fact, there was some talk of him replacing Tom Brady under center before Cam Newton signed with New England.

Unfortunately, the young quarterback fell out of favor throughout the offseason and during the regular year. He appeared in five games for the Patriots, recording two touchdown passes against three interceptions in the process. Right now, the Pats should consider moving Stidham for pretty much any type of compensation. They have a future franchise quarterback in Jones and a stopgap option with Newton. Perhaps, a team like the Detroit Lions might make some sense.

There’s been talk that New England might very well opt to trade former NFL Defensive Player of the Year Stephon Gilmore. If that is indeed the case, acquiring another veteran to team up with J.C. Jackson could make sense. Heck, there’s a chance that New England opts to keep Gilmore and move off Jackson in a trade. 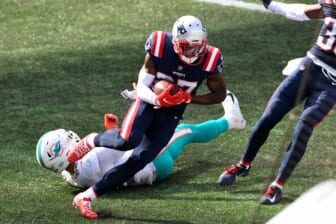 Either way, Sherman makes perfect sense for Bill Belichick and Co. He’d come in on the cheap and seemingly still has something left in the tank despite missing all but five games with the San Francisco 49ers last season. Sherman is the type of late-offseason signing that had in the past defined the New England Patriots under Belichick.

Chad Johnson. Randy Moss. Antonio Brown. What do these three all-time great receivers have in common? New England made blockbuster plays for them in recent years with varying levels of success. What’s to stop the Patriots from attempting to repeat this with Julio Jones? 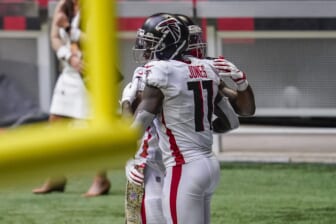 By now, it’s well known that Jones will likely be dealt before Week 1. He’s 32-years-old, coming off an injury-plagued 2020 season and would cost New England $15.3 million against the cap. These are the issues this late in the offseason. Even then, adding him to the mix with free-agent signings Nelson Agholor and Kendrick Bourne could help Mac Jones succeed out of the gate should he start in 2021. Offering up J.C. Jackson or Stephon Gilmore and a second-round pick to the Falcons could work, too. There’s a reason why Jones is a seven-time Pro Bowler and all-time great. Perhaps, he can rekindle that in New England.