WATCH: Protestor at French Open ties herself to net during a semifinal match 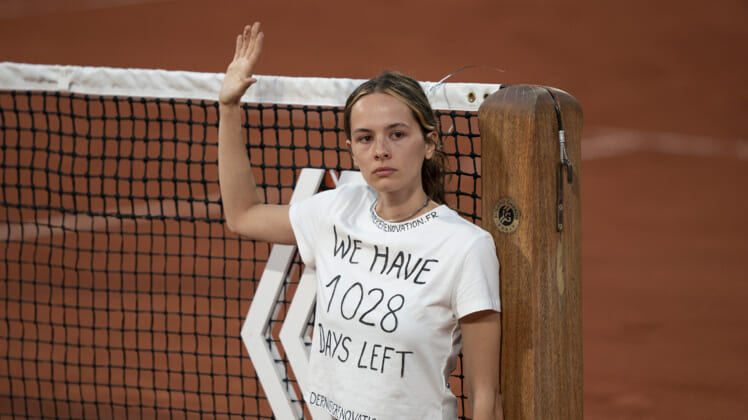 While Iga Swiatek’s French Open women’s championship win might be a lasting memory for many over the last two days of the event, one protestor looked to make a longer-lasting statement of their own on Friday.

Over the last couple of months, there have been some unique public displays of outrage at sporting events over various social issues in the United States and around the world.

Fans in the States witnessed a few oddball cases during this year’s NBA Playoffs. In a Western Conference play-in matchup between the Minnesota Timberwolves and Los Angeles Clippers last month, a woman glued her hands to the court to protest the fact that former Timberwolves owner Glen Taylor owns a factory egg farm.

The Timberwolves witnessed more zaniness a week later when a woman attempted to run on the court during one of their playoff games against the Memphis Grizzles. She was quickly tackled before she could reveal her true goal, but that instance was also to protest Taylor’s egg farm that the woman claims “roasted 5.3 million chickens alive.“

On Friday, there was another moment of public protest during a popular sporting event. This time it occurred in Roland Garros at this year’s French Open. During a semifinal match between Norway’s Casper Ruud and Croatian Marin Cilic, a woman was able to find herself on the famed clay tennis court.

Before Ruud was about to serve cameras caught him pause with a confused look on his face. The camera eventually panned to see a woman wearing a shirt that said “we have 1,028 left” on both sides as she tied herself to the net, and kneeled down waiting for venue security to eventually show up. 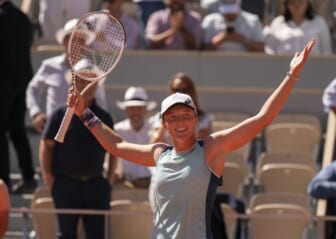 The protest from the French national halted the match for over 15 minutes and reportedly was an attempt to bring attention to a recent UN report on climate change.

“An environmental activist managed to get onto Philippe Chatrier Court and attached herself to the net with metal wires and glue,” the French Tennis Federation said in a statement. “The young woman, of French nationality, entered the grounds with a valid ticket early in the day. She was then handed over to the police,”