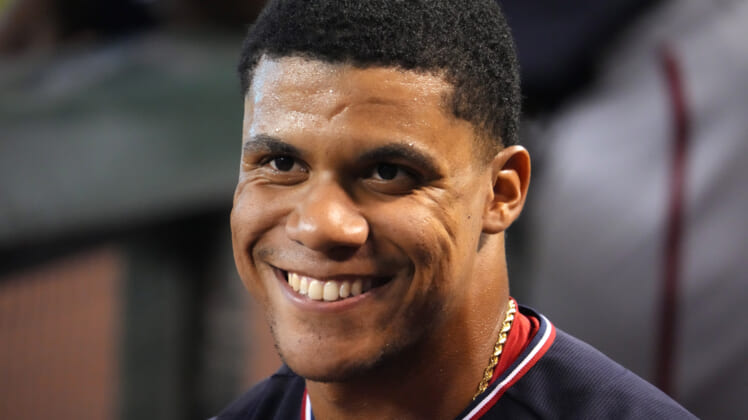 When it comes to a potential Juan Soto trade, the Washington Nationals reportedly will be looking for players that can make an impact on the big league very soon, and not in the near future.

The 2022 MLB trade market has all the makings to be busy and historic. Multi-time All-Stars like Willson Contreras and Luis Castillo could be moved to contenders. And Andrew Benintendi is a player some think can be a major addition to several teams ahead of the Aug. 2 trade deadline. However, no trade — if it happens — is anywhere near as impactful as a possible Juan Soto deal.

Soto is already one of the better players in the league at only 23 and is like the Kevin Durant of MLB. In that, every team in the league is interested in acquiring him. However, that doesn’t mean every organization will have the assets to do so. Which begs the question, what do the Nationals want in a deal that ships out their best player?

Well, we have an answer to that question. On Saturday, ESPN MLB insider Buster Olney revealed in a new column what the team is looking for in a trade return for the star outfielder.

That is pretty notable because surely many suitors for Soto have elite-level prospects in Double or Single-A. However, that wait is not what the Nationals want as they try and turn around a franchise that has hit rock bottom.

Another key factor in a deal is the belief around the league that the team will definitely move the two-time All-Star in the next couple of weeks, as opposed to waiting until the offseason.

“Whoever is included, a deal for Soto is a real possibility before the Aug. 2 trade deadline, according to multiple rival executives — partly because his trade value will only decline year to year, in concert with his rising salary, and partly because of the perception that the ongoing sale of the team is a driving force,” Olney wrote on Saturday.