Why the Washington Football Team is the worst name in sports

The Washington Football Team was right to change their team name. Their old one was divisive and caused turmoil. Yet their temporary solution should not be considered a permanent fix.

Why should there be one ‘Football Team’ in a league with 32 of them?

Is it fair for one team in the National Football League to be titled the “Football Team”? Does that make any sense? No, the Washington Football Team name doesn’t make sense and it’s also not fair to the rest of the league’s organizations.

The team name shows a lack of creativity. I’d understand if this were 1920 when the NFL was founded, but here we are 100 years later with instant access to countless creative individuals who come up with better names, logos, and designs every week.

There’s never going to be a consensus where everyone agrees on a new name. Yet, over time a new team name will be more and more accepted and even celebrated.

Sure, not all existing team names are great or make a ton of sense as is, look at the Los Angeles Lakers for example. I’m not suggesting the WFT go back to their old name, but Football Team?

I agree, there’s no need to rush a decision. Ideally, you pick one and stick with it. Everyone agrees, it’s much better to come up with a permanent solution. But even the remote possibility of the Football Team name sticking around seems a bit careless.

Washington Football Team is a lazy excuse for a team name

WFT? More like WTF came up with this name? Imagine if all NFL football teams had a similar name. Los Angeles Football Team? It sounds like a startup league or maybe your local junior football club. Basically, it doesn’t work.

There’s no pride in being a member of ‘the football team’. But being a member of really anything that’s not demeaning gives players a sense of identity. How many times have we heard of a player growing up playing for a team named the Panthers or another name loosely representing an NFL team? When they get to the NFL and actually play on the Panthers, it’s a big deal. It becomes a part of who they are, tattoos and all. 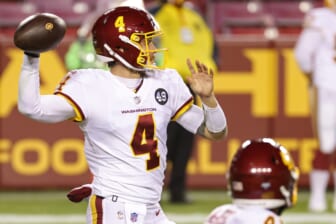 Imagine if an expansion team came into the NFL, would their name gain much traction or popularity as the Mexico City Football Team? No, of course not.

The only reason why the name has any traction at all is because WFT is all they could come up with at the time, so at this point, it sounds familiar. That’s it. Familiarity doesn’t make a name good.

How about the Washington Football Renegades?

Seeing as though they’re already copying the New York Football Giants nickname in a way, how about something like the Washington Football Renegades? The point is, having the word “team” in your team name makes the idea a bit redundant. Everyone knows you’re a team. Should you have to state it?

When it’s time to consider a permanent name change for the Washington Football Team, let’s hope they bring some more outside-the-box ideas to the table. Which football team do you root for? The Football Team! Ugh. We can do better.

According to a video released by the Washington Football Team, they have narrowed their list of considered name changes down to three. Of course, to keep us guessing, the three names have been blurred out. However, there was a list revealed of eight finalist names the team is rumored to be selecting from. Though Washington team president Jason Wright denies the list of eight being accurate or final, so really the new name could still be a toss-up.

In any event, we rank the eight “finalist” team names below.

It seems no matter what, the Washington Presidents wouldn’t be widely accepted. This is probably a bad idea.

An armada is defined as a fleet of warships. What does that have to do with Washington?

More military references. What would a logo of a large group such as a brigade even look like?

The Washington Commanders isn’t very exciting. Will players see the Commanders and feel compelled to go play for them? Probably better options outs there.

The incumbent option. So simple and empty. Missing out on a lot of marketing opportunities. No mascot, not even much of a logo. Maybe we just wait until a better option comes along?

Admittedly the Washington Defenders sounds kinda cool. A defender could be portrayed in a number of ways. Unfortunately, the XFL already has a team named the DC Defenders. I don’t think that would go over too well.

Why the red? I understand some want to keep the letter ‘R’ involved, but new traditions can be formed too. Washington Wolves flows better.

Again with the Red. The Washington Hogs make sense with their offensive line being nicknamed the Hogs during the 80s and 90s leading to three Super Bowl wins. Shouldn’t winning the Super Bowl be enough for this franchise? Go with the Hogs and call it a day. It’s a lot better than Football Team.

For what it’s worth, Washington team president Jason Wright did suggest their decision-makers are still open to new ideas.