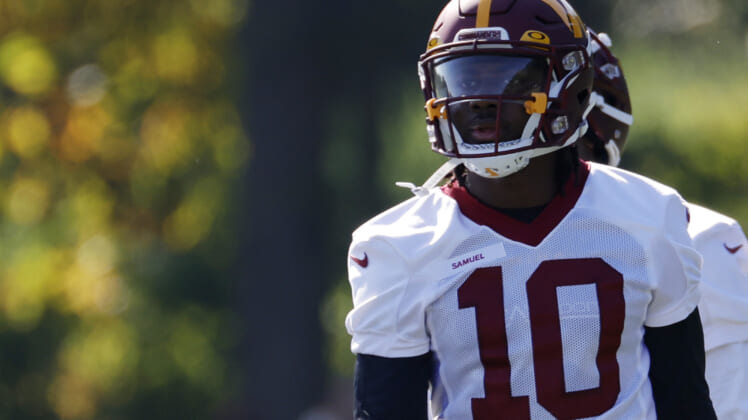 It’s NFL training camp season, which means you’ll hear countless stories about athletes who claim to be in the best shape of their lives. You’ll hear no such thing out of Washington Commanders camp when it pertains to Curtis Samuel in 2022.

Washington was happy to land Samuel as a free agent, reuniting him with his Ron Rivera, his head coach from their Carolina days. They gave Samuel a three-year, $34.5 million contract before the 2021 season began, but he’s played in just five games since.

Now according to Rivera himself, the team is concerned about Samuel and his “overall football shape” with Commanders camp underway.

Rivera went on to stress the importance of just being ready for the regular season. So while there’s some concern, it’s not as bad as it sounds. They’re just trying to do what’s best for Samuel, helping him progress at the pace that’s best for his body. Samuel is said to have experienced some tightness in his hamstrings and lower back. Join the club.

While the Commanders don’t appear to be worried about getting Samuel acclimated in time for the season, the receiver himself might want to show some urgency.

Since Samuel joined the team, he’s seen Terry McLaurin become fully entrenched as the unquestioned top target of the Commanders’ offense. Not only that, the Commanders clearly identified receiver to be a major area of need, which they hope they’ve addressed by selecting Jahan Dotson in the first round of April’s NFL Draft. By all appearances, Dotson’s gotten off to a good start with his new team.

Now Samuel’s looking at a future where he’s no higher than third on the receiver depth chart. I can tell you right now, that’s not what Washington envisioned his role would be when signing him for just under $11.5 million per season.

Basically, it’s time for Samuel to step up before he finds himself on a new team next offseason.