Washington Commanders sale could happen ‘soon’ for $7-plus billion, Jeff Bezos likely out

Washington Commanders owner Daniel Snyder is reportedly moving forward with selling the team, with an official sale possibly by March.

Snyder announced in November that he hired Bank of America Securities to evaluate the possibilities for a sale. At the time, it was unclear whether he took the measure to pursue selling a partial stake in the franchise or wanted to sell the club outright.

The Commanders have since been making steady progress on a deal, fielding record-setting offers from multiple parties with Snyder fueling a bidding war. Now, less than a year after the Denver Broncos sold for an American sports record $4.65 billion, Washington’s NFL franchise is poised to nearly double that mark.

According to JP Finely of NBC Sports Washington, a sale of the Commanders is coming ‘soon’ with sources close to the negotiations indicating a deal could be reached by March. Importantly, any deal Snyder makes with a potential ownership group requires approval from the NFL.

How much will the Washington Commanders sell for?

Forbes estimated the Washington Commanders’ value at $5.6 billion in 2022, making them the sixth-most valuable franchise in the NFL. As the Broncos’ sale demonstrated, though, competition to buy an NFL team drives the price up significantly.

Mike Ozanian of Forbes reported in December reported that multiple groups have offered Snyder at least $7 billion for the Commanders. It means the final deal will shatter the global record for the highest price ever paid for a sports team, passing the $5.3 billion price paid for Chelsea FC in 2022.

Finley reported on NBC Sports Washington that billionaire Todd Boehly has pulled out of the bidding for the Commanders. As of now, per multiple sources, billionaire sports owner Josh Harris could be the favorite to buy the team from Snyder.

When Snyder first announced his exploratory process, Amazon founder Jeff Bezos was viewed as the overwhelming favorite to buy the franchise. With a net worth of $121.3 billion, he could easily win a bidding war and would become the richest team owner in American sports history. However, Front Office Sports reported on Sunday that Bezos still hasn’t submitted an official bid for the NFL franchise. With a deal moving forward quickly, moving past the deadline for bidders, he is no longer expected to buy the team.

After reports connected Bezos to the Commanders for years, his decision to not submit an offer to the franchise might be tied to Snyder. The Washington Post, which Bezos bought in 2013, first reported on the Commanders’ toxic culture and multiple allegations of sexual harassment and misconduct against Snyder. 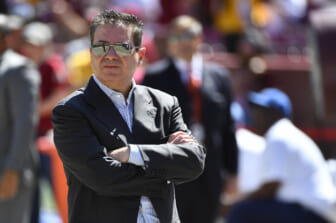 The history between Bezos and Snyder likely played a significant role in the outcome with the Commanders. However, there will be other opportunities for one of the richest people in the United States to buy an NFL team.