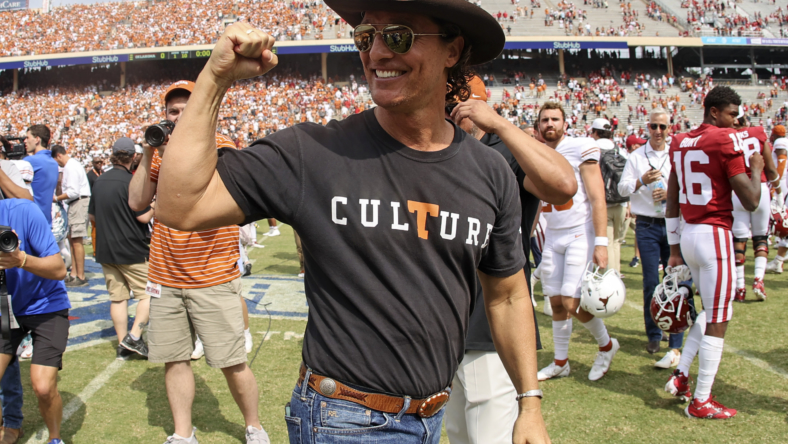 The Washington Commanders will likely be sold here within the next several months after embattled owner Daniel Snyder announced that all options were on the table when it comes to the future of the organization.

Primarily, Washington has hired BofA Securities to oversee a potential sale of the NFL franchise.

Almost immediately, Amazon founder and the richest man in the world, Jeff Bezos, reportedly showed interest in buying the Commanders. Said report indicated that he was forming a group that includes hip-hop artist and entrepreneur Jay-Z.

We’re now hearing some more on this, and it’s rather interesting stuff. According to Sara Nathan and Michael Blinn of the New York Post, Matthew McConaughey will join this group in an attempt to pry the Commanders from Snyder.

“Matthew has always been a huge fan and his ties with the team go way back,” report on Matthew McConaughey joining Jeff Bezos-led group to purchase the Washington Commanders. “They support his foundation and he’s good pals with Dan Snyder — he and [supermodel wife Camila Alves] were on Dan’s yacht over the Super Bowl last year.”

Known primarily for his roles in Dazed and Confused (1993), How to Lose a Guy in 10 Days (2003) and Interstellar (2014), McConaughey also won the best actor award at the 2013 Academy Awards for his role in Dallas Buyers Club.

The Uvalde, Texas, native is the co-owner of the MLS’ Austin FC franchise and has dipped his toes in a ton of stuff outside of acting. That includes being active in politics and returning to the University of Texas as a professor. McConaughey, 53, is said to have a net worth of $160 million.

In addition to this new wrinkle, Brooklyn Nets star Kevin Durant noted that he’d also be interested in joining the group.

“In a perfect world, I would be a part of it,” Durant said about potentially joining a group to buy the Washington Commanders. “I would love to do it. I would love to give a little bit of my money to be a part of the Commanders, but we’ll see. Hopefully, it’s somebody nice. I heard [Amazon CEO Jeff] Bezos and Jay-Z, but you never know.”

A native of Washington D.C., Durant has always had ties to his home region. He’s been extremely active in the area from both a community and philanthropical standpoint. KD is said to have a net worth of roughly $200 million.

Matthew McConaughey and Kevin Durant would join the Bezos-led bid to buy the Washington Commanders as very limited partners. But they’d become the celebrity face of the organization. As of right now, the sale of this organization is expected to reach a whopping $7 billion.