In this latest nugget from the UFC news cycle, the betting odds for the UFC 279 bout pitting Khamzat Chimaev vs Nate Diaz is a showcase of how absurd the promotion’s decision was to even book such a matchup.

The saga of Diaz trying to fulfill the final bout on his UFC contract and go live his best life elsewhere has been fodder for MMA and sports site headlines since December. Both he and former interim lightweight champion Dustin Poirier pushed for a bout against each other on the promotion’s January UFC 270 card in Anaheim, California.

Yet, despite it being a matchup casual and die-hard fans yearned to see — after a scheduled booking between the two fell through in 2018 — the UFC couldn’t make the bout happen. During that time, UFC president Dana White made it known publicly that a matchup between Diaz and the company’s fastest rising star, Khamzat Chimaev, was a personal preference for Diaz’s next foe.

As the months went by and Diaz continuously used Twitter as his dissatisfaction bullhorn to no avail, it seemed that White would eventually get his way. In spite of the fact that Chimaev is now a top-three ranked welterweight deserving of a title fight, and Diaz hasn’t won a bout at 170 pounds in six years. In the end, the UFC finalized the booking the boss wanted and Chimaev vs Diaz is set to headline UFC 270 on Sept. 10.

Well, the odds for what looks like will be a one-sided affair continue to evolve and the sports book that works with the UFC currently has their lines set with Chimaev being a massive -1250 favorite to the underdog Diaz at +800.

Those numbers are pretty stunning considering the notoriety Diaz has in the sport of MMA. The only UFC main event or co-main event fights in recent years that had such a betting disparity included Amanda Nunes and Valentina Shevchenko. The two best female cage fighters of all time, and two women that have lapped their divisions to where they’ve had difficulty finding worthy challengers for years. None of their opponents had anywhere near the name value of Nate Diaz.

However, that shows the enigma that the Californian is. While he is one of the most well-known fighters in UFC history he still owns an unimpressive 20-13 record and has lost three of his last four bouts. Diaz is a main event name that doesn’t have PPV main event talent anymore. 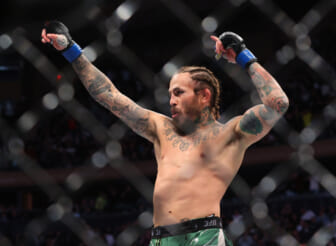 What also adds to the oddity the 37-year-old is, is the fact that his optimal weight class is 155 pounds and he refuses to fight in that division. So now, he will serve as an undersized welterweight, who has been rag-dolled with wrestling in the past, that will fight the biggest and best wrestler in the welterweight division.

“Borz” just beat a former title challenger and seriously talented fighter in Gilbert Burns this past April, and it could be said that he made several poor strategic decisions during the bout and still won.

Chimaev vs Diaz will be an elite-level display of a lamb being fed to the slaughter in Sept. and the current betting odds are a showcase of the wrestling-style squash match the UFC is serving up to fans for $75.