Top 10 Indianapolis Colts players of all time, including Peyton Manning and Marshall Faulk 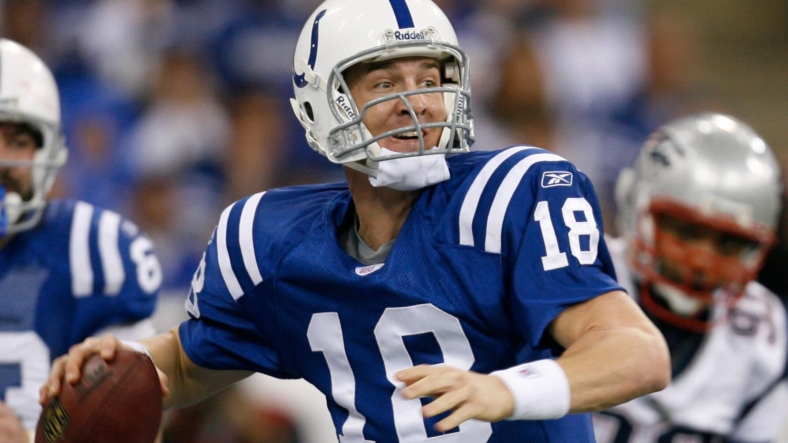 There are quite a few players that have come through the organization that will be seen as some of the best competitors to ever play the game. But which are the very best of the best in Colts history? Here are the 10 best football players in Indianpolis Colts lore.

Hilton is a four-time Pro Bowler. He is third in franchise history in targets (1076), catches (631), yards (9,691), and yards per game (67.8). Also, the Colts won 60% of the games Hilton played in and will be a future Colts Ring of Honor (ROH) inductee. At this point, he has not officially retired yet but is not currently signed to a team. He is only 309-yards away from reaching 10,000 for his career. And if he accomplished this with the Colts it would make them the only franchise to have three wide receivers with 10,000 yards.

Marshall Faulk was the team’s best running back and played until a couple of the other guys on this list arrived. Faulk only played five seasons with the Colts. During that time he earned three Pro Bowls and three second-team All-Pro selections. He also earned the 1994 Offensive Rookie of the Year and three player of the week awards. Faulk ranks second in franchise history in rushing yards (5,320) and touchdowns (42).

The best-left tackle in franchise history. Glenn played his entire career, 10 seasons, in Indianapolis. Initially drafted as a guard before moving out to left tackle. He got to block for Marshall Faulk, Edgerrin James, and Peyton Manning. Glenn is a three-Pro Bowler and a one-time Super Bowl champ. In fact, six months after winning the Super Bowl he retired. He too is a member of the Colts ROH and is currently their most recent inductee.

Saturday played 14 years in the NFL, 13 of them with Indianapolis and his final one in Green Bay. During his playing career, he made six Pro Bowls, was named a two-time All-Pro, and is also a one-time Super Bowl winner. Maybe most impressive is that he only committed 24 penalties and only fumbled two times in his career. He is a member of the Colts Ring of Honor and is maybe most famous for helping to resolve the 2011 NFL lockout.

In his 17-year career, Freeney ranks 18th with 125.5 sacks, with 107.5 coming in Indianapolis. During his career, he made seven Pro Bowls, three All-Pros, and one Super Bowl, and was named to the 2000s All-Decade team. He comes in second to Mathis in sacks, QB hits, and forced fumbles. He is the franchise leader in tackles for loss. Freeney is also a member of the Colts’ ROH. Plus, this year marks the first time he’s eligible for the NFL Hall of Fame.

During Mathis’ 14-year career, he is a five-time Pro Bowler, one-time All-Pro, and Super Bowl, winner. He holds the franchise record for sacks, (123), QB hits, (141), forced fumbles, (54), and touchdowns scored by a defensive player, (3). He finished fourth in fumble recoveries with 17 and is a member of the Colts’ ROH. He ranks 19th in the NFL in sacks right behind Dwight Freeney.

The second-best Colts wide receiver of all time. He and the best wide receiver of all time are in a tier of their own when it comes to this franchise. Reggie Wayne is second in franchise history in targets (1,714), catches (1,070), yards (14,345), touchdowns (82), and yards per game (68). He does own the franchise record for games played and that is 211. During his illustrious 14-year career he racked up six Pro Bowls, one All-Pro, and one Super Bowl. He is of course a member of the Colts’ ROH and will be a future NFL Hall of Famer. Wayne is currently the team’s wide receivers coach.

The most recent Colts inductee into the NFL Hall of Fame. Edge ranks 13th in NFL history with 12,246 rushing yards. It goes without saying that he is the Colts’ all-time rushing leader with 9,226 yards. He is also the franchise record holder for both touchdowns (64) and yards per game (96.1). During his 11-year career, he racked up four Pro Bowls, one All-Pro, and joins Freeney on the 2000s All-Decade team. In 1999, his rookie season, he led the league in rushing (1,553), finished fourth in MVP voting, third in Offensive Player of the Year, and won the Offensive Rookie of the Year award. And for an encore, in his second year he led the league in rushing (1,709), again, and scrimmage yards (2,303)

In 2005 he led the NFL in receiving touchdowns for the season with 12. He is an eight-time Pro Bowler, five-time second-team All-Pro, a four-time Player of the Week, three-time All-Pro, and Super Bowl winner, and joins fellow teammates James and Freeney on the 2000s All-Decade team first team. All of this led to him being inducted into the NFL HOF>

Was there any mystery as to who was going to be number one? Peyton Manning ranks third in the NFL in total passing yards with 71,940 and touchdowns with 539. His 49 touchdowns in 2004 rank fourth in NFL history for most touchdowns in a season. Only twice in his Colts career did throw under 4,000 yards in a season; 1998 and 2005.

He also made the Pro Football Reference All 2000’s team, the 1998 NFL All-Rookie team, and the NFL 100 All-Time Team. The latter is no surprise considering he made the NFL Top 100 five times in his career. All of this led to three things 1) becoming a member of the Colts’ ROH, 2) being inducted into the NFL Hall of Fame, and 3) having a statue of him out front of the stadium. The Sheriff is arguably the best quarterback of all time.